When players dive into Far Cry Pri­mal, the first thing they will notice is the prehistoric setting. Because of this, the way Far Cry Primal is played is es­sentially much different from previous games in the series. All modern equip­ment that players were accustomed to in the previous Far Cry games are re­placed with more primitive equipment such as the bow and spear. This was the first major gripe I had with the game. With such a lack of variety in the equip­ment you can use, the gameplay be­comes boring and tiresome after a few hours of playing, especially when you factor in the amount of time you will spend gathering resources.

Like previous games in the series, Far Cry Primal allows players to gather resources throughout the map by col­lecting different kinds of plants and through hunting various animals. With these resources, players can upgrade their equipment, from increasing inven­tory size to increasing the damage on bows and spears. This is when the game­play becomes very tedious and boring due to the amount of time you spend gathering specific resources.

The only thing that helps makes the gameplay endurable are the visuals in Far Cry Primal. From bright and vibrant colors in the forest, to the harsh snow in the mountains, this game is drop dead gorgeous.

Beside the simplistic nature of the gameplay, Far Cry Primal does intro­duce a few new mechanics. One of these is the ability to tame animals. This fea­ture is a nice addition but sorely under­developed. Tamed animals in the game only serve two functions: assisting in fights and serving as a means of trans­portation. When a tamed animal is equipped, the player can press a button over an enemy and that animal will attack it. Other than these two func­tions, tamed animals serve no other purpose, and there is no customization with them. You cannot create armor for them to help them survive longer in the more difficult parts of the game, and the lack of customization leaves no per­sonal attachment to the animal, so each animal you tame feels generic.

The other new mechanic that is in­troduced is the upgradable village. In the story, you play as a hunter named Takkar who has gone searching for his tribe in the land of Oros. Once there, Takkar must then protect and help grow his clan against two rival clans. To do this, the player uses gathered resources to help increase and upgrade huts in the village. This part of the game was fun but also underdeveloped. I wished the customization options were greater, such as creating your own huts in spe­cific ways, and creating totems your own way. 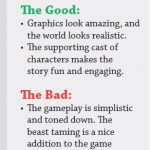 ashes in her home country. Throughout the story, these characters developed and changed. Tak­kar throughout the story remains the same and does not change as a charac­ter. Because of this, there is no per­sonal attachment to the character, so he is ultimately forgettable.

The villains in Far Cry Primal are also disappointing. They lack charisma and depth like other Far Cry villains. Their purpose boils down to Takkar needing someone to fight. Throughout the story, Takkar is aided in his quest by a cast of various supporting charac­ters, and these characters made the story a more enjoyable experience. Each of these characters show more emotion than Takkar, and because of this, their missions were the most enjoyable part of the story.

In the end, Far Cry Primal’s biggest hindrance is the simplicity of it. Both the story and the gameplay are boring and repetitive, and after a few hours will begin to bore most players. If you are a fan of the Far Cry series, or a fan of first-person-shooters and like the idea of exploration and resource gath­ering, then this game is at least worth checking out.

Should You Meet All The Single Ladies?