The latest installment in the 007 franchise, directed by Sam Mendes, follows the notorious spy, James Bond as he travels around the world looking for an infamous group known as Spec­tre. Things become complicated and you have a variety of themes enter the mix: betrayal, love, and disobedience.

Daniel Craig returns to his role as James Bond but with a sudden addi­tion to his character. Previous films had Craig portraying Bond as more serious and less light hearted. In this film, he acts more like the old James Bond in the original series such as acting cocky, and more charismatic. Some might welcome this change while others, like me, might be con­fused at the sudden shift in character and tone. 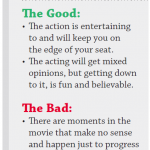 Besides the lighter hearted na­ture of the film, there were moments that were absolutely absurd. One in­stance occurs when James Bond is in the mountains, in the middle of no­where. As a car chase begins James disappears off-frame for a few minutes. Then we transition to the point of view of the car driving away and see James Bond enter the scene, driving a plane. When and how did this happen? There were no planes in sight when the chase initially began. Another instance of this bizarre nature was right after a funeral of a woman’s husband, James flirts with the widow and then pro­ceeds to have sex with her. I under­stand films are fictional, but they still should retain some sense of reality.

Another issue I had with this film was that of familiarity. As mentioned, Bond is looking for an evil organiza­tion. On the way he is met with various roadblocks that halt his progress. This is similar to the plot of nearly every other secret agent movie out there.

Though the movie is painfully av­erage, there are good moments. The fighting, for example, is well done. One sequence has Bond fighting someone in a train and the choreography is done well. The fighting is fluid and makes sense. The fight goes through the ma­jority of the train and goes from dif­ferent seating sections to the kitchen straight to the cargo hold. Throughout the scene, I never felt bored nor lost my attention.

Besides the intense action scenes, there really isn’t anything in this mov­ie that will make you remember it from other spy films. It’s just another spy movie. If you’re a fan of James Bond and/or a fan of spy movies, this mov­ie deserves at least a watch.