Fallout 4 is a Bethesda game. Full disclosure: I’m an unabashed fan of this style of game. However, they’re not for everyone. What you thought of their previous games—Fallout 3 and Skyrim—is probably a good indication of how you’ll feel about Fallout 4.

If you’ve not had the pleasure, Bethesda games are action role-playing games characterized by their large, im­mersive open world settings, a first per­son perspective, and numerous oppor­tunities for looting. Said worlds are absolutely riddled with dungeons, ran­dom encounters, and a few, longer, fac­tion quest lines (which I won’t spoil). Moreover, these games are decidedly long-form. Hours can be spent just wan­dering around, killing things, and not really accomplishing anything.

Fallout 4 is set in the former Com­monwealth of Massachusetts 200 years after the titular nuclear war and subse­quent fallout. The American wasteland is populated by violent raiders and all manner of mutated, radioactive creatures (it’s not exactly realistic). Because 1950s stylings were apparently “in” when the world—and culture with it—ended in 2077, everyone was literally trapped in a 1950s hellscape. The contrast between the jovial 1950s technology / cultural artifacts and the stark reality of the af­terscape forms Fallout’s central irony.

Now, this all sounds fairly textbook R.P.G., but, man. There’s just something about exploring a huge, fully-voiced world in first person. As an action role-playing game, everything occurs in real time. This, together with the meticu­lously-crafted host of items, gives Fallout 4 an overwhelming sense of physicality and an amazing atmosphere. Take, for instance, a Cambridge street on rainy night. The crumbling brick buildings are darkened save for a few barrels worth of firelight. Creeping through the dilapi­dated floors of these ruins you must listen intently. Distinguishing the low growls of feral ghouls from the loud downpour can be the difference between life and reloading a save point from a few minutes ago.

The Commonwealth’s level design is similarly immersive. Whether you’re exploring the outlying hills, trudging through waist-deep water in a flooded subway, or battling super mutants high above downtown Boston there’s always some hidden loot to be found. Every area is clearly handcrafted, often surpris­ing you with clever little secrets; like precarious pathways leading from the freeway to apartments inaccessible from the ground.

Inon Zur’s soundtrack and ambient environmental noises like dripping wa­ter accentuate each and every area, paint­ing a thick, often creepy atmosphere. I found myself jumping at many sudden sounds in dungeons like the under­ground mines (the first person perspec­tive does much of the work here). Head­phones are of course recommended for the full effect.

The last and most crucial component of the Commonwealth is the items. Ev­ery item in Fallout 4, whether a laser gun or a toaster, has a detailed 3D model and a purpose in crafting. Weapons and ar­mor can be dismantled for parts, scraps can be used to augment equipment or build towns, herbs can be made into ability-increasing drugs (no really), and monster parts can be cooked to create health-restoring items. Not only does this make the areas themselves feel lived-in, but it invests the player in them as well. By creating a gameplay incentive to explore the space you’re in Fallout 4 inherently makes you care about it.

The crafting system itself is straight­forward, but sufficiently nuanced. Dif­ferent weapon and armor mods require different types of scrap. For instance, nearly all weapon mods require screws. You can mark specific scrap types—wood, gears, copper, etc—and items out in the world will display a magnifying glass icon next to them, indicating that you should pick them up.

But all these means of crafting have only one end; combat. Good, then, that the combat is fun. It’s satisfying to shoot things up, if ultra-violent and gory. Play­ers can go about it several ways depend­ing on their character build; guns blaz­ing (there are a lot of different guns), swinging a melee weapon, sneak attacks, or even clad in full-body power armor.

What sets Fallout 4’s combat apart is the Vault-Tec Assisted Targeting System, or V.A.T.S. It lets you slow time with the push of a button, targeting the head, arms, legs, chest, or additional extremi­ties of different enemies, and select ex­actly what you want to attack. This auto fire system is useful, but balanced. Each body part has a percentage chance to hit and each action you take in V.A.T.S. costs action points, which are also used to sprint. It’s a clever system that lets you pull off potentially-devastating maneu­vers. 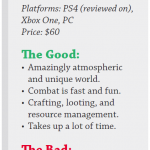 V.A.T.S. is particularly crucial since many of the enemies in Fallout 4 are really, really fast. If guns weren’t imme­diate enough, melee-attacking enemies like feral ghouls will also rush you, some­times in overwhelming numbers. V.A.T.S. helps stem that tide, slowing things down.

Healing is a constant strain because to restore health you must eat items which contain radiation, thus reducing your maximum health. Enemies also deal radiation damage, further reducing your maximum health even in the mid­dle of combat. Due this Fallout 4 can be very difficult until you start cooking, which removes radiation (somehow) and increases the healing effects of food. The new quick save feature is an impor­tant addition that keeps the difficulty from becoming too punishing.

The inventory screen, it must be said, is kinda weak. It’s nice that the map is nondescript, functioning as a guide to the world rather than a flat, reductive way to view the Commonwealth. How­ever, the menus lose a lot by not display­ing the items’ 3D models (like Skyrim did) outside of the inspect mode. The default, glowing-green user interface put me off initially. Thankfully, the options menu is fairly exhaustive, allowing a veritable rainbow of gaudy inventory screens.

Another hurdle is the very matter-of-fact intro. Fallout 4, for all intents and purposes, lacks a tutorial, basically as­suming you’ve played Fallout 3 (2008). It’s helps that the tips displayed on load­ing screens are helpful, but it isn’t near­ly enough. Especially for new players a game as difficult, as complex, and as grotesque as Fallout 4 can be discourag­ing.

Finally—if you can get into it—Fall­out 4 is one of those games you just feel giddy to get back to. It’s one of the most engrossing and rewarding experiences that art has to offer.