On the night of Oct. 31, 1963, 6-year-old Michael Myers, fully dressed in a clown cos­tume, vigorously stabbed and mur­dered his sister Judith. Fifteen years later, he escaped from Smith’s Grove Insane Asylum and hunted down his supposed sister, Laurie Strode (Jamie Lee Curtis), while also killing off her friends. Fast forward another 40 years, Curtis reprises her role and Laurie gears up for a battle with Michael — who is back and stronger than ever.

The 2018 version of “Halloween” was highly anticipated, and the mov­ie actually surpassed all my expecta­tions. Although the film had its flaws, it is safe to say that it was almost as good as the original.

For die-hard fans of the Halloween franchise, this movie will deliver excite­ment. There was a plethora of Easter eggs and an overall feeling of nostalgia for the old Michael Myers. The little details, including the ghost sheet on the dead body and the sets and props used in general, give fans a glimpse of the previous films in the series. The storyline of Michael and Laurie’s final fight was perfect for the 40 year await­ed wrap up to the franchise.

After so many years of sequels that didn’t have the John Carpenter, the director and composer of the original “Halloween,” vibe of the first two mov­ies, “Halloween” 2018 went back to the franchise’s roots and strongly cap­tured the ambiance of the first film. From “Halloween 3” through “Hal­loween Resurrection,” to the two Rob Zombie remakes, all of the other se­quels took away the fear factor of Mi­chael. They focused more on the vic­tims and other characters, rather than the serial killer himself. In 2018’s rendition of “Halloween”, director Danny McBride goes back to basics: Michael and his will to kill. 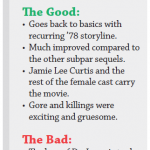 Curtis did a remarkable job re­turning to her role as Laurie Strode. We are shown a different side of Lau­rie that we didn’t get to see in the 1978 film, proving that her past trauma has truly changed her. She portrays a strong female character that firmly protects her family at all costs, all while trying to avenge the killings of her friends from over three decades ago.

The rest of the casting was also fit­ting for the film. Laurie’s doubtful daughter, Karen (“13 Going on 30’s” Judy Greer), and courageous grand­daughter, Allyson (Andi Matichak from “Orange is the New Black”), portray their characters accurately. These women work together to prove that three generations of badass wom­en can take down their nightmare.

“Halloween” 2018 did however, have some small flaws. First, the loss of Michael’s infamous psychiatrist, Dr. Loomis was a hard character to re­place, as he had passed in a previous movie. While Michael’s new doctor, Dr. Sartain (Haluk Bilginer), is played well, no one could compare to the original Loomis. Another flaw was the contradictory notion that Laurie was not Michael’s sister. It was revealed in “Halloween II” that she is his sister, and was given up for adoption after he killed Judith in fear that she was next. Despite this. in the 2018 film, they point out that the sibling theory is inaccurate, and was only a rumor. The movie should have continued the theory to make the plot more interest­ing, as well as to go back to the roots of it all.

“Halloween” is one of the most popular movies during this time of year; it’s a perfect film for a good spooky scare. So, this Halloween, plan a movie night to binge-watch the en­tire franchise and then go see the new “Halloween” to follow the ongoing story of Michael Myers.