Successor to 2011’s Dark Souls and 2014’s Dark Souls 2, the action RPG Dark Souls series is back. Like its predecessors, Dark Souls 3 follows the same formula as the previous games in the series. The player is thrown into a chaotic world where they have to go around collecting souls all while facing hordes of menacing, challenging creatures that block your progress. Though it’s the third game in the series (fifth if you count Demon’s Souls and Bloodborne) that follows the same formula, the game is still very enjoyable. That being said, if you have grown tired of the same formula and are expecting something different with this game then you will be disappointed.

The gameplay in Dark Souls 3 receives minor tweaks to the formula. In addition to the already standard gameplay mechanics of parrying, rolling, and blocking, Dark Souls 3 reintroduces the mana bar from Demon’s Souls. The mana bar in this game is for spells, pyromancy, and weapon arts.

Weapon arts are a new mechanic introduced, and each weapon art is tied to a specific weapon. By using your weapon’s ability, you can perform powerful moves that use up energy from your mana bar. Each move is distinctive and it’s worth experimenting with each weapon to see its different move.

Like its predecessors, Dark Souls 3 retains the same graphical issues. Frame rate drops can occur in some parts of the game, which causes annoying slow down in the visuals of the game. This also causes button presses to be delayed. This problem became more apparent as areas became more 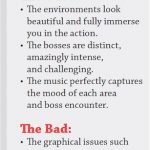 hectic. For example, while playing, my game began to slow down due to the number of enemies that were on my screen at once. For a game that is heavily reliant on dodging enemy attacks, having the frame rate drop and affect your ability to play is a great annoyance. Despite these issues that I had, I still took pleasure in my experience with the gameplay.

One of the many aspects that fans of the Souls games enjoy is the environment and the overall immersion that it creates. Each area in Dark Souls 3 looks distinct. From deep below the earth to areas high in the mountains, each area is noticeably different.

It helps that the game is absolutely beautiful. Running on the engine used for Bloodborne, everything in Dark Souls 3 is well detailed, from the environments to the details on the bosses. The game perfectly captures the dark atmosphere that it was trying to achieve.

Speaking about bosses, Dark Souls 3 has the most challenging to date. Each boss is punishing and brutal, and the chances that the player will be stuck on one particular boss is quite likely. Although it’s punishing, it is also fair. Each time you die from a boss, you learn something new. Did I dodge at the wrong time? Was I too aggressive? Each encounter is educational and once you actually manage to beat a boss, it feels so satisfying. What adds to the enjoyment of these bosses is the music that accompanies each boss. The orchestrated music in Dark Souls 3 is gloomy and dark and perfectly captures the mood of each area and boss.

Dark Souls 3 is an amazing game. Even after hours of playing, I still haven’t visited everything this game has to offer. If you are a fan of the Souls series or haven’t played one but enjoy difficult games then you will absolutely love every minute of this game.

Hardcore Henry Almost Made Me Hurl