Pitch Perfect 2 is already a success. At the time of this writing, it’s already made 70 million dollars in the Unit­ed States, more than twice its 30 mil­lion dollar budget. That’s especially impressive considering it’s been out for less than a week. Fans of the first Pitch Perfect probably aren’t sur­prised. The first movie was a surprise hit with a loyal following, so the sec­ond was bound to get noticed.

But is Pitch Perfect 2 a worthy sequel?

The movie follows the Barden Bellas, an all-girls acapella group, as they try to regain their position after a fall from grace. It’s been three years since the events of the first movie and the girls are seniors, with Beca, played by Anna Kendrick, leading the group. But, like in the first mov­ie, something is keeping Beca from fully committing. This time, it’s an internship at a record label. And, with the group having to compete in a world acapella competition to re­gain their standing, they have to work together to win.

If this sounds familiar to the first movie, it is. The Bellas have to prove themselves again to a world that doesn’t think they’re good enough and they have to “find their sound.” Plot-wise, there aren’t a lot of sur­prises — if you think something’s going to happen, it probably is. 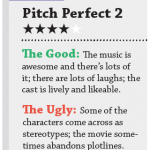 However, the familiarity isn’t nec­essarily a negative. It’s good to see the characters we loved from the first movie, and when they interact and sing together, it’s amazing. The songs are all great, and more of them are in the mashup style than in the first one, which makes them more mem­orable.

Like in the first movie, there are plenty of laughs to be had, though some of the jokes fall flat. Flo, played by Chrissie Fit, the only Latina mem­ber of the Bellas, seemed especially stereotypical, with deportation jokes and everything. While other jokes, like ones told by the sexist and big­oted male announcer, work because they’re making fun of the person’s beliefs, these feel like they are rein­forcing stereotypes rather than sub­verting them.

Among the new things popping up in the movie is Emily, played by Hailee Steinfeld, a freshman Bella who wants to make a name for her­self. She features prominently in the movie for being a new character, sometimes to the exclusion of the old characters the audience loves. Her character is important to the plot and yet one of her plotlines is set to the side unceremoniously, a problem that happens a few times in the movie. Beca’s boyfriend, Jesse, played by Skylar Astin, could have been written out of the movie en­tirely without being noticed, for all the importance he has. Due to things like this, the movie does lag around the middle, though it does pick up for a memorable finale.

Overall, the movie is a fun expe­rience. If you liked the first Pitch Perfect movie, you’ll love the sequel, and if you thought the first was okay, you might find the second better. It may drag at times, and some of the jokes will make you cringe, but it’s still worth a watch.