Gravity Rush is a perfectly placed palette cleanser. With the cur­rent gaming landscape inun­dated with too much open world land­scape to walk across, here comes a game where you fly everywhere. You play as Kat, the amnesiac fledgling superhero­ine of Hekseville (don’t worry how to pronounce that—the game isn’t voiced anyway). As the apparent town heroine you’ve got a lot of monster-vanquish­ing, citizen-saving, gem-collecting, race-running (?), and balloon-catching (wait, what?) to do. Look, Gravity Rush is just a video game and as a game it has needs—namely to have objectives like “run the race” and “take the quiz­zes on environmental cues.”

Starting off, Kat finds herself just trying to fit into this unfamiliar, float­ing town of Hekseville. The nevi—also known by their academic name “shad­ow monsters”—are terrorizing the city in the sky by doing #justmonst­erythings. By following her superhero inclination Kat meets Syd, a down-on-his-luck policeman. Her monster bash­ing lands him with a, somewhat un­derserved, promotion and before long he ropes Kat into using her gravity-powered flight to thwart the criminal mastermind, Alias.

Flying in Gravity Rush is simple; just press R1 to float in zero gravity, aim in a direction, and press R1 again to fall towards it. Now, I suppose that’s not technically flying, but it is signifi­cantly different to many other “flying” games. If you direct Kat at a building she will stand, jump, and fight on its side as if she was straight out of The Matrix. Can’t do that in Superman 64 now can ya?

It must be noted that, though it does an admirable job in keeping up with Gravity Rush’s omnidirectional ambi­tion, the camera does struggle in plac­es. The camera troubles are most pro­nounced in the more intense moments of the combat. At least I never found myself losing my bearings—the game does a good job of keeping you ori­ented within the cityscape. 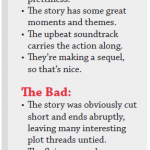 If being like a bird is Gravity Rush’s strength, then evolution is its weakness. It never really evolves past the floating and aiming flying kick attacks at the nevi’s glowing red weak spots. That combat is most of what you’ll be doing in the main quest. Outside of that, there are challenges and gem collecting in the city; both activities reward gems with which to upgrade Kat’s powers.

Gravity Rush is almost excruciat­ingly evocative of Ghibli films like Spirited Away—the energetic orchestral music, the tone of wonder and whim­sy, they’re all there. At the same time it tries to ape comic books by having cutscenes told via original illustrated comic panels. And it all works! The graphics are cel-shaded, or rendered to look flatter like an anime, with lib­eral use of color which furthers the comic book motif. Each of the four areas of Hekseville has it’s own looping musical theme and uniquely-colored sky to set the tone.

Adding to the graphics are the—frankly unfair to other games—anima­tions. Gravity Rush does a great job in creating expressive, dynamic anima­tions while not inhibiting control of your character. Kat feels snappy and responsive to control in the air and out.

And on Kat… I like her. Big “that being said” sign, just tell me if any of this sounds familiar: she’s a clumsy, ambiguously-clothed female protago­nist who can’t remember her past, has trouble fitting in, and faces public criticism for her superheroing. So Kat’s a full-on amalgam of tropes, but I still like her as a lead character. Her dia­logue and inner monologue are often engaging and—this is obviously a base­line thing but nonetheless a concern—at least they let her do something as a female protagonist. She never feels like a helper character in someone else’s story.

Gravity Rush has its fair share of contrivance and “because the plot told me to” character motivations, but it’s entertaining and suitably complements the gameplay. Ominous foreshadowing and darker, intriguing themes are pres­ent as well. Encounters with the enig­matic gravity shifter, Raven, provide some of the game’s best moments (it’s all exactly as comic book-y as it sounds).

Here’s the biggest sticking point: there’s literally more closure in the title of the platinum trophy than there is in the ending credit sequence. Yes, Grav­ity Rush does that terrible thing of abruptly ending without giving closure on a number of key plot points.

But, even if that is, like, really bad, I’m a firm believer in the journey being more important than the ending. And the journey is a trip in its own right.

The Hidden Dangers of Spring Break