The posters for Burnt feature Brad­ley Cooper in a chef ’s uniform, face stern, arms crossed, with the tagline “Never underestimate a man with ev­erything to lose.” It’s an intriguing state­ment, but, after seeing the movie, ends up with little weight. Cooper’s character, a chef trying to put his life together after shattering it due to his addictions, is not that man.

The movie opens with Bradley Coo­per’s character, Adam Jones, in New Orleans, finishing his self-imposed punishment of shucking a million oys­ters. Once he’s done, he hops on a plane to the UK and never goes back. Why did the movie need to start in New Orleans? Why did Adam decide to shuck oysters as a form of self-punish­ment? There are no answers, good or otherwise.

Once he’s in the UK, Adam starts his quest to run another restaurant, hop­ing to earn a third Michelin star—one of the highest ratings a restaurant can get. It is here where we get to see him truly interact with other people, and where the film can get to be cringe-worthy. There is no superlative too good for Adam—he’s the best chef everyone has ever met! He’s the Rolling Stones of chefs! He’s so charming, he got a les­bian to sleep with him! For a chef whose drug use ruined his life, everyone is still quick to say how awesome he is.

Far too quickly, it feels, Adam con­vinces an old friend, Tony, played by Daniel Brühl, to give him a chance at running a restaurant again. This is one of the big problems with the film— things come way too easily for Adam. If his problem is that he is a chef battling to return to the top after ridding himself of his drug addiction, there should be more of a struggle. Adam is not told “no” enough, and when he is, it’s usu­ally reversed in the next scene. At this point, we don’t know what he did to burn so many bridges, but we know he seriously messed up, but he’s still able to get a restaurant, as well as hand-pick a team of chefs to work in it.

One of those chefs is Sienna Miller’s Helene, a tough woman who cooks as well as any of the guys, and who you immediately know will end up with Adam. 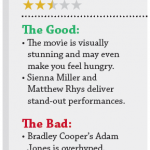 Despite being stuck as the amaz­ingly obvious love interest, Sienna Miller is one of the bright spots of the movie, looking toned down from her usual glamorous self, making the char­acter feel real. Another notable member of the cast is Matthew Rhys as Reece, Adam’s old rival and head chef of a com­peting restaurant. He steals every scene he’s in with his energy as a high-strung, ready to explode, master chef, which adds a delightful flavor to the movie.

Also worth noting is the film’s cin­ematography, especially when it comes to the food. Every plate is gorgeous, and it’s shot in such a way as to maximize the drool factor. Don’t go into this movie hungry—with all the beautiful food, you’ll be about ready to start chomping on your own arm towards the end.

But back to the plot: Adam has a restaurant and a team assembled, and now he’s going after his third Michelin star in earnest. The biggest problem with this plot is that the stakes feel too low. If he doesn’t get it, so what? He’ll be sad? Possibly relapse? Sure, he wants to prove that he’s still the best after his drug abuse, but frankly, that’s not enough. Adam is not likable enough that we automatically want him to succeed; in fact, he’s usually the opposite. Some of his kitchen rants would make Gordon Ramsey blush, and he goes as far as to physically push around one of his chefs. If he fails, he would deserve it.

Indeed, some of his behavior comes back to bite him, though sadly, not where it hurts the most. The movie seems to be playing on Bradley Cooper’s charm and likability, not Adam’s, which is questionable. At the end he may be a better person, but it’s almost by accident, rather than by design. And that may be the film’s greatest weakness.

Overall, Burnt suffers from stakes that are too low and a main character that has it too easy and relies on the actor’s charm rather than his own. De­spite its faults, the film is still watchable, thanks to the luscious images of food and help from the supporting cast.