Sometimes, it’s easy to feel that there’s nothing new in action movies. With it being a popular genre, it’s inevitable that some of the same things pop up in every movie. So, when I heard that there was a new action movie coming out shot entirely from the perspective of the main character, I was intrigued. I’d never seen a movie like that before, and the plot sounded fun, if not particularly original—a man wakes up to find that he’s part robot and he has to save the woman he loves. I was stoked to see Hardcore Henry.

It was the worst theater experience of my life.

Within minutes of the movie starting, the constant jostling and shaking of the camera made me queasy. I’ve seen other movies that use shaky cameras, like found footage movies, but never like this before. The camera is nearly ceaselessly jolting, with the character constantly running, jumping, looking at his shoes, and rarely ever holding a shot still. I have never felt motion sick in a movie before, but during Hardcore Henry I had to suppress the urge to puke. If I hadn’t been watching it for a review, I would have walked out, as I was honestly feeling that miserable. If you’ve got anything less than a stomach of steel, I would avoid this movie at all costs.

Of course, there is more to the movie than just the camera work. There’s the plot, which is underdeveloped to the point of being confusing. The protagonist, Henry, wakes up and finds himself to be part robot, and almost immediately, people come in and attack him. Why? We don’t know until the end, and the twist makes no sense. The villain has telekinetic powers, which feels out of place, as the movie’s world is like ours, but with better technology, so why the random magic? He does stupid 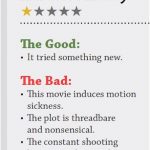 things just to move the plot around or because the director felt it looked cool, like levitate corpses around him in the air, which Henry can then use as stepping stones to reach him in order to beat the hell out of him. This is not a movie controlled by logic—it’s an excuse to shoot up as many random attackers as possible.

It’s rated R for nearly every possible reason: there’s tons of gore throughout just for the sake of gore, swearing, a scene at a brothel so it can show naked women, as well as drug use. I think the only thing it’s lacking is male nudity. Now, there’s nothing wrong with a brutal action movie, but it all feels so gratuitous. When people are constantly getting shot, blood splattering everywhere, it feels meaningless. It’s like a video game, but with a terrible plot and horrible camera controls. The effects are mostly good, with some of them being too obviously CGI’d, but when it’s just to gun down more nameless, faceless minions, it gets tedious.

In the end, although Hardcore Henry tried to bring something new to the action movie genre, it doesn’t mean it’s worth your time or money. Unless you enjoy stupid, pointless movies which may induce motion sickness, avoid this movie at all costs.