Monster Hunter is a game about hunting monsters, but the degree to which that statement is fulfilled is what makes it special. The story, appropri­ately, boils down to hunting a se­quence of large monsters for various reasons, leaving the focus on those action RPG boss battles.

Players in either single-player or up to 4-player LAN or online multi­player will take on the role of hunter, and not just in name only. Combat tasks them with studying large beast’s animations to catch a variety of tells for their various attacks, avoid them, and step in to strike when the crea­tures stop to catch their breath. As combat progresses players will have to use potions to heal, whetstones to keep their blades sharp, and track beasts to other areas of the map.

Monsters don’t have simplistic health bars, instead hunters must watch the actual creature for signs of weakness; limping, broken horns, or severed tails. When exhausted, mon­sters will slow their movements, like real animals, often pausing to catch their breath and faltering. Hunters must capitalize on these opportuni­ties to deal kill the monster, allowing them to carve materials from the monster to improve their armor and weapons with. Where weapons and armor take monster parts to make, potions, traps, and all of the other items in the game can be crafted from raw materials gathered in the envi­ronment. I appreciate how well the hunter/gatherer gameplay meshes with the primitive setting.

Monster Hunters have high ani­mation priority, meaning that once you start an attack you’re locked into it. This adds no small degree of strat­egy to the action-based combat, as players must quickly plan their ac­tions to not only avoid enemy attacks, but capitalize on openings. The dodge roll mapped to the B button is crucial for this, as it helps hunters maneuver around the battlefield. Hunters will also want to focus their attacks on certain areas of the beast, as breaking body parts will yield additional ma­terials as quest rewards.

In Monster Hunter progression is dictated by two things; experience and equipment. Not experience points or levels, but real experience learning the way certain monsters attack and move. While in town be­tween hunts hunters can use materi­als taken from past hunts to upgrade their weapons or craft new pieces of armor. To their credit, Capcom craft­ed four versions of each armor set; a male and female variant of both the melee and ranged version of each set. As a result there is a huge variety of armor, most of which can be recol­ored at will. Players can customize their hair, facial tattoos, and eye color, though gender, skin tone, and voice are locked once selected at the beginning of the game.

New to Four Ultimate is the climb­ing system. Now areas incorporate much more verticality than past in­stallments to facilitate jump attacks, allowing hunters to mount monsters and damage them heavily.

There are a total of 75 bosses and 14 different weapons (11 melee and three ranged) in Four Ultimate, pro­viding plenty of variety to the game­play. The true beauty of Monster Hunter is the many different styles of weapons and the way they combine, especially in online play. The hunting horn-wielding hunter can improve the party’s attributes with songs while the archer fires on the monster from afar. Meanwhile the hammer hunter attacks the beast’s head to stun it and the switch-axe user hacks away at the creature’s side to damage its legs. 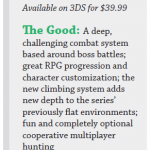 Monster Hunter is a generally pol­ished game, but some of the larger, more unwieldy monsters can cause clipping issues and temporarily trap your character on rare occasions. In my over 100 hours of playtime I have yet to encounter anything game-breaking. Perhaps the worst problem is the rare random disconnection from an online quest, especially if it was your turn to pick a quest.

While the lack of a substantive story or characters is disappointing, the cutscenes are pretty and the in­credible untamed fantasy world can’t be understated. The world feels wild and untamed, fitting the hunter/gath­erer gameplay. The environments, creature design, and music all em­body that. The orchestral score is usually good and often fantastic, though in practice the song variety is lacking. The soundtrack is plenty long, the game just restricts certain songs to specific monsters, leaving the same one or two songs to play during each 20-30 minute hunt with each beast.

Monster Hunter is a lot to take in for newcomers, but immensely re­warding to those who stick around to learn its intricacies. To its credit, the game has a fairly intuitive learn­ing curve. Playing, I never felt pun­ished for my ignorance, I just felt like I was gradually learning how to be a more efficient hunter. Your milage may vary. The best advice I have for newcomers is to train with others in the online multiplayer, ask questions, and to always bring the maximum amount of potions, mega potions, and whetstones. Also of chief impor­tance is the target camera. Once you meet a monster just click its icon on the touch screen and from then on every click of the L trigger will re­center the camera on that monster, allowing hunters to follow monsters in even the most frantic fights.

I won’t lie, I love almost every­thing about this game. If what I de­scribed here sounds enticing and you own a 3DS then I suggest picking the game up, it’s far and away the best game in the series and one of the best recent action RPGs.

Setting the Bar for Small Businesses