Released on October 27th, Halo 5 continues where the story ended in Halo 4. Cortana, Mas­ter Chief’s A.I. companion, is gone, and now Chief is on a mission to find her. Chief, and his team, known as blue team, have gone AWOL and now a new pro­tagonist, Spartan Locke and his team, Osiris, have to go find them.

Throughout the Campaign you switch playing as Locke and Chief. How­ever the amount of time you spend play­ing as them is vastly different. Through­out most of the game you will play as Locke and for most Halo fans this might be a disappointment since Chief has always been the lead character in a Halo game. What also might add to this dis­appointment is that Locke isn’t an in­teresting character compared to Chief. This goes for both members of Blue Team and Osiris. Throughout the cam­paign they follow you into battle, but they really never add much. They are pretty much there just to help bring you back up if you fall in battle or soak up bullets as additional targets.

The story itself is also lacking. Like Halo 4, it feels disjointed. While playing the campaign I never really fully under­stood who or what these characters were, but the game told it in a way like that you were supposed to. It seemed the only way to fill in the blanks was to go to outside sources like reading the light novels and/or watching the animated specials.

Thankfully not all things in the cam­paign were disappointing. The gameplay has been refined and tweaked for a smoother experience. You ca 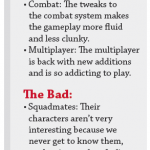 n now aim down sights in the game which makes playing seem more fluent and less clunky and will give players who are used to playing other first-person shooters an easier time getting used to the game. As I mentioned previously, the addition of teammates to the campaign means you never go into battle alone. If you get downed by an enemy, your squad mates can revive you and bring you back into the action. This makes the game much easier but this process does have its drawbacks. The A.I. for the squad mates isn’t exactly great and throughout the campaign they will either do one or two things: Not revive you by standing still, or continuously run into walls. This proved to be very annoying at times.

Besides the gameplay, multiplayer has received some tweaks and refine­ment as well. Some new game modes have been added such as Warzone. War­zone is a mode in which players are dropped in a huge map where they have to reach 100 points by completing var­ious objectives. This can be from captur­ing bases, defeating bosses, killing other players, and destroying the other team’s generator. Also, a new mode added is the Halo take on search and destroy. You only get one life and once all other players on the team are dead, the game is over. This brings a challenge to the multiplayer as you work together to keep yourself and your teammates alive.

The standard leveling up and unlock­ing things system has been done away with for a newer system, requisition points. These points are earned through playing matches and can be used to purchase card packets which then can be used in game. These packets contain a random assortment of things such as armor and weapons. Besides getting req points you can just buy these card packs with real money. Thankfully this system can only be used for Warzone game modes and not in the others, such as Team Slayer, and King of the Hill.

Halo 5 is a fun game. Though it has a few problems involving the campaign, the good outweighs the bad. If you are a fan of the previous Halo games and look forward to the multiplayer, then Halo 5 is a must buy besides its flaws with the campaign.