We’ve grown up loving the band Queen. Our parents nostalgically play hits such as “Another One Bites the Dust” and “Somebody to Love” time and time again, allowing our genera­tion to feel love for Freddie Mercury and his equally as talented band­mates. The new film, “Bohemian Rhapsody,” sheds light on the strug­gles Mercury and Queen endured — including sexual and cultural identity, the repercussions of fame and wealth, and AIDS awareness.

The film follows Queen along their journey to stardom. Although it em­phasizes the entire band, the focal point is frontman Mercury (Rami Malek from “Mr. Robot”) and his struggles. The film re-enacts how some of Queen’s most iconic songs were made — including “Bohemian Rhap­sody” itself. These songs gave the band unlimited success but had dark con­sequences on Mercury that ultimate­ly led to his unruly death.

The messages in the film are not only completely necessary, but also very representative of the lives of these stars. Mercury faced cultural identity issues, and his struggle with this is depicted throughout the film. Also known by his birth name Farrokh Bulsara, Mercury was a Parsi descendant that hid his Indian ethnicity from the world. Although his reasoning for doing so was not mentioned in the film, it was revealed that he struggled with his cultural identity enough that he chose to change his name to “Fred­die Mercury.” 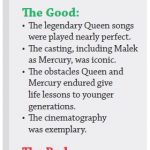 “Bohemian Rhapsody” was every­thing and more that Queen fans needed. Malek played an extraordi­nary embodiment of Mercury — with eery likeness — truly capturing the essence of the legend. In movies, es­pecially ones like this, casting is so important, and they couldn’t have done it any better. Queen’s Brian May (Gwilym Lee), Roger Taylor (Ben Hardy from the “X-Men” series) and John Deacon (Joe Mazzello from “The Social Network”) did the late band’s tribute justice. From the kind Mary Austin (Lucy Boynton) to Mike Myers’ character of Ray Foster, the casting was on point and was the perfect match to re-enact these true events.

Out of all the positive aspects of this film, there was one main flop that left a small, sour taste in my mouth: the lack of acknowledgment of Mer­cury’s sexual identity. Although they touched on some of his struggles with his sexual identity (i.e., the Mary Aus­tin story), they spent only a small por­tion of the film focusing on his gay lovers, including his long-lasting re­lationship with Jim Hutton (Aaron McCusker from “Shameless”). The movie touched more on his relation­ship with Austin than his gay partners. Freddie Mercury was more than just his sexual identity, but it was still a struggle he overcame that finally al­lowed him to be himself. It was disap­pointing, to say the least, that the movie barely touched on that aspect of his life.

“Bohemian Rhapsody” satisfied fans and shed light on some very im­portant messages that Mercury and Queen itself dealt with. This movie was needed to show audiences, young and old, the life of one of the best rock bands of all time. Long live Freddie Mercury — long live Queen.