Deadpool is as unconventional as you can get. The over-the-top violence, crude humor, and the character Deadpool are all unique in this movie. Despite the minor flaws with the characters and the story, you will be amazed, and love this mov­ie from beginning to end.

This isn’t Deadpool’s first appear­ance on the big screen. Back in 2009, Deadpool made his first appearance in theaters in the movie X-men Origins: Wolverine, directed by Gavin Hood. However, the adaptation of Deadpool was not well received by fans of the character. Deadpool was known to be loud, violent, and have a mouth that reflected his obnoxious personality and the movie did a poor job representing that. This movie, however, is more faith­ful to the character, and because of this it creates a movie that is a blast to watch.

Deadpool works well because of Ryan Reynolds. Reynolds returns as Deadpool, and steals the limelight. As Reynolds performed during the movie, it was obvious that he was having fun with the character. He was energetic and never seemed like he was losing steam or getting bored with the char­acter. Reynolds constantly cracked jokes throughout the film. These jokes varied from being crude, to over-the-top toilet humor. The jokes can be hit and miss, and at a point it grew tiring listening to them. However, when the jokes did work, they were funny and well done. In the movie Deadpool con­stantly breaks the fourth wall and ad­dresses the audience with information regarding current events and outside knowledge, like references to Reynolds’ failed movies as Deadpool in X-men Origins and his title role in the 2011 movie, Green Lantern.

Unlike Deadpool, the other char­acters in the film are lacking in depth. Both Colossus and Warhead from the X-men universe make cameo appear­ances. They don’t add anything to the movie, and are just there so Reynolds can make dick jokes about Colossus, or make jokes about Warhead being a teenage girl. Besides these characters, the villains in the movie are very forget­table. The villains have no depth to their characters, and are the typical bad guys that hold no interesting qualities that separate to from other villains. 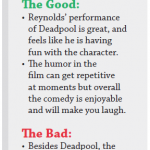 It also doesn’t help that the plot in the story is rather generic. It’s a standard revenge trip where the bad guys did something to Deadpool and now he wants to get even. Not all things about the story are bad though. Since this is an origin tale for Deadpool, the film shows how he got his powers through occasional flashbacks. In any other movie this would break the viewers’ immersion in the story, but with Dead­pool, it’s different. Deadpool addresses when a flashback happens and it works because he constantly breaks the fourth wall. What would fall flat in other mov­ies, manages to work here because it is such a different type of comic book movie.

With other comic book movies you have the main protagonist slowly dis­cover their powers and then about mid-way through, things get hectic. In Dead­pool things immediately get crazy within the first 2 minutes of the film. From that point on, it never lets up, and the crazy is accompanied by the massive amount of violence in the film.

The movie’s action is constantly engaging and the violence is over the top. The use of comedy in the action is also done very well. One example is when Deadpool tells the audience the number of bullets he has left in his guns. He then counts down the number of bullets he has left as he shoots. Since the action is over the top, it gets pretty violent, so people who don’t like a lot of violence will be turned off of this film.

Deadpool is a good film because it knows what it is. It doesn’t try to be anything different. If you’re not a fan of crude humor or over the top violence, then Deadpool is certainly not a movie you should watch. But if you are a fan of the Deadpool comics, and enjoy crude humor, and don’t mind the vio­lence, then you will certainly have fun watching this movie.

Hail, Caesar! is a Lush Tribute to Hollywood’s Golden Age