Released in 1967, Disney’s animated movie The Jungle Book was an instant classic, one which many people fondly remember from their childhood. It spawned an animated sequel as well as a previous live-action remake, so why bother with yet another spinoff?

Well, because this one is actually worth watching. The biggest draw of this take on The Jungle Book is that it is visually stunning—it’s a place you want to visit. Even when there’s not much going on onscreen, the visuals are enough to capture you. The jungle is depicted lushly, sometimes looking friendly in the bright sunlight, with greenery everywhere. Other times it’s ominous, the darkness and shadows making it look threatening. There’s always something interesting to look at, no matter what the scene.

The animals are animated well, looking like they’re actually present in the scene rather than a poorly added aftereffect. The wolf cubs are some of the cutest creatures you’ll ever see, all while managing not to look cartoonish. Many of the animals talk, and it manages to look natural, rather than forced. As the movie is mostly made up of animal characters, this is very important.

The lead character and lone human, Mowgli, is played by Neel Sethi, who does well in his first movie role. He’s a likeable kid, and his actions with his CGI costars feel genuine. The animals are voiced by a star-studded cast, with Ben Kingsley as Bagheera, Bill Murray as Baloo, Idris Elba as Shere Khan, and Christopher Walken as King Louie. Kingsley and Walken especially stand out. Kingsley gives 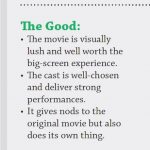 Bagheera, the panther who finds Mowgli, a world-weary quality while also coming across as someone who cares deeply, despite his stern nature. Walken’s King Louie is very different, coming across as more of an old-school mob boss rather than a king of the apes, but once you get past the initial strangeness, it’s actually a great performance. There’s an extra layer of menace that wasn’t present in the original animated movie, and his version of the song “I Wanna Be Like You” is quite memorable.

That brings up another of the movie’s strengths, which is referencing the original but not being tied to it. It follows the basic story—get Mowgli to the man village so that Shere Khan doesn’t kill him—but it takes it to different places. This version of The Jungle Book feels more serious and will probably be scarier for young children, but it’s still pretty tame, with a PG rating. It’s not a musical, but it does incorporate two songs from the original in a way that doesn’t feel shoehorned in, as this adaptation is not a musical. There are some bigger differences, like the ending, but it works in the new story. The differences help The Jungle Book be more than its predecessor transferred to a live-action world.

The only thing to complain about is that the plot does feel thin at times, but the movie’s so lovely you probably won’t notice. It would have been nice to make the movie longer, as it’s only an hour and a half, but you can’t have everything.

Overall, The Jungle Book is an adventure worth taking, especially in theaters, so you can really soak up all the cool visual details, either in 2D or 3D.

Why the Fat Acceptance Movement Does More Harm Than Good

Making a Musical Splash at the Tacoma Dome