Every era of cinematic comedy is clearly marked by a set of typical conventions found in the media of the time. “Sam and Henry,” the first situational comedy, debuted on WGN Radio in 1926, and this soon became the primary form of entertainment on television. “The Graduate” incorporated the changing sexual dynamic of the 1960s — this sort of social commentary carried into 1970s filmmaking. At the same time, directors like Mel Brooks pio­neered the parody genre.

Late ’90s and early 2000s comedies were a string of gags and gross-out scenarios that followed a paper-thin plot. Some, like “Harold and Kumar go to White Castle,” did this rela­tively well. They held out against the mainstream introduction of Judd Apatow’s humor long enough to get multiple sequels. Other comedies like “Wet Hot American Summer” flopped on release, but for some rea­son garnered enough attention to attract a cult-following.

In this age of rehash, reboots and long-awaited sequels, it’s no surprise that 2001’s “Super Troopers” was next to be resurrected. 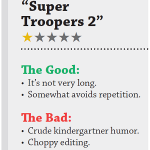 hey’re summoned by their former boss, Capt. O’Hagan (Brian Cox), for a chance to get their old jobs back.

The borders between America and Canada are being redrawn due to a centuries-old error and a small Ca­nadian town is set to be turned over to the state of Vermont. The state government wants an American pa­trol to keep an eye on the locals until the logistics of the transfer are squared away, but for these patrol­men, there’s a lot that can go wrong.

This is a return to old form in every possible sense. Even in 2001, people found a bunch of traffic cops screwing with people just a bit tone-deaf. How­ever, it has its fans and as a crowd­funded project, “Super Troopers 2” delivers more of what they like. It doesn’t have what you would call re­deeming qualities, but the experience is mercifully short and it makes an effort to avoid repeating jokes the original made.

Still, it can’t help but reference them in not-so-subtle sequences. There’s not much material left for this review to work with since most of the jokes fall under the “smashed nuts” category, edited together like an Edgar Wright zombie.

Anyone who remembers watch­ing “American Pie” will understand what kind of mess they’re getting into from watching the trailers. Whether or not they’re onboard from there is up to them.