You’d think more people would understand why the release of “Black Panther” is significant given America’s first legitimate feature was white supremacist propaganda. Since the first early reviews hit the web, Marvel detractors have been asking: what’s the big deal? Before comic book movies took over the box office in the late 2000s, quite a few films already starred a black protagonist: “Spawn,” “Steel,” “Catwoman,” “Meteor Man,” “Hancock” and “Blade;” to name a couple. The Marvel Cinematic Universe even features War Machine, the Falcon and Nick Fury!

The thing is, none of those pre- Marvel movies were very good — with the exception of “Blade II.” They didn’t successfully gain anyone’s attention. The black characters in the Marvel movies are not exactly frontrunners either. Then there’s the feeling that a black protagonist is still a token character in their own movie. Too often they are depicted by mainstream media as products of the struggle; as drug addicts, slaves, convicts or criminals. Cultural roots are rarely celebrated. “Black Panther” makes it its mission to do so, and does people of all races a favor by being legitimately great.

The fictional African nation of Wakanda appears to the world like any other developing country, but behind the curtains it is the most advanced civilization on Earth. T’Challa (Chadwick Boseman), the Black Panther, returns to become King, only for a new threat to make a claim for the throne. The future of Wakanda will determine the fate of the world.

Grandiose themes are not novel to superhero movies, but many aren’t able to see them through in a way that resonates with audiences. Watch any Zack Snyder DC film for a terrible example of a Christ analogy. “Black Panther” revolves around a particular way of thinking, one that calls back the moral divide between Martin Luther King Jr. and Malcom X — with just a hint of James Baldwin. It’s not simply a comparison. The arguments that live within the Civil Rights Movement are what gives each of these characters their motivation. The central conflict is already stronger than most Marvel films because it’s a real conflict, not a fantastical alien horde.

Wakanda is also better realized for drawing on African cultures to inform its own futurized version. It’s hard to tell the architecture from the fashion because they’re both expressions of tribal art. They embody a mixture of tradition and technology, a motif present throughout the entire movie. When it incorporates a full-on mythological aesthetic, it transcends that hokey pseudoscience barrier that keeps audiences distant and becomes something primal; and it’s enrapturing.

Boseman is calm and collected as the titular guardian of Wakanda, able to wear the mantle outside the suit. His powers are granted by the extract of Vibranium-laced flowers, and T’Challa has them frequently taken away to test his worth as king and warrior. Because his secret identity abroad is also his public identity at home, all the advanced resources of Wakanda are at his disposal. He is almost always accompanied by warrior women and bureaucrats, which makes for a very broad cast, but also 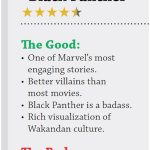 makes him different from almost every other Marvel hero thus far. With the slick mannerisms and fancy gadgets, it’s as good an argument for a black James Bond as any. “Black Panther” looks damn cool, but that stuff’s typical comic book fare. What brings it home is T’Challa’s relationship to Michael B. Jordan’s Erik Killmonger.

What are the good villains in the Marvel Cinematic Universe? Loki, who has had various films to grow as a character? The Vulture, who had an actual cause? It’s almost not even worth mentioning, but Marvel has a problem with writing compelling villains. None of them ever seriously challenge the hero outside of a physical threat. Jordan may come off more intimidating than usual as Killmonger since he’s a walking bicep in this movie, but his motivations actually present T’Challa with a real dilemma.

Killmonger represents an attitude of the militant black radicalism that Baldwin warned against in a letter to his nephew: cautioning him about the taking of violent revenge against oppression. Killmonger’s preferred avenue of closure is at odds with T’Challa’s inclusionary inclinations, but the anger is justified and they both want what is best for their people. Any villain that is actually right in some respects is bound to be remembered over one with no discernable high ground at all — unless of course you are Andy Serkis. His rambling take on Ulyssess Klau is bonkers from beginning to end.

“Black Panther” also boasts one of the more lively soundtracks in the saga, full of breathless jungle drums. The only real problem with the film is its ambition sometimes escapes the budget of the graphic designers. The CGI effects are very poor by today’s standards, making some action sequences feel more distracting than engaging. It’s disappointing considering the fullness of its world, but “Black Panther” still remains a satisfying watch. It has become the biggest February opener since its initial weekend run, and shows no signs of stopping. Support history in the making and catch the train while it’s rolling.

How accurate is RateMyProfessors.com?