When people think of genre films, they tend to expect a certain set of con­ventions typical of the category. Plot, setting, casting, iconography, directors and characters follow a familiar beat. The burden of all stories similar to one another is to find a unique voice of their own. Some popular subgenres, like heist movies, find it difficult to do so. The first half introduces the crew of thieves, their skill sets, the motive for taking the job and a snappy montage of the initial planning stages.

A cinematic heist will either go off without a hitch or succeed despite an unforeseen circumstance, and a last minute reveal is often given to the au­dience to explain how the crew pulled it off. It’s an entertaining but extreme­ly recognizable formula that’s prone to trope. That basically sums up my feel­ings toward director Christian Gude­gast’s “Den of Thieves.”

Gerard Butler is Nick O’Brien, a hard-drinking Los Angeles sheriff hot on the trail of Rey Merriman (Pablo Schreiber) and his team of outlaws, who plan to rob the Federal Reserve. Any viewer already knows what’s next: The first half is the introduction of players and motive while the second brings things to a head. Yes, there is a twist at the end. The film follows a well-worn path, so it must be the char­acters themselves that differentiate it from so many others.

There is ample opportunity in “Den of Thieves” to do something different, but its characters do little more than grunt, stare or get drunk. O’Brien is a shady cop with a shady past that’s never really explored, saddled with a side plot about his divorce that has nothing to do with anything else. There is no 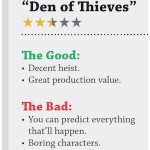 indication that this somehow fu­els his brutal attitude at work, so we’re left with two different movies in one. There is also the fact that this sort of sheriff would cause a public outcry in today’s political landscape. O’Brien could’ve represented some provocative social commentary, but alas, we get an otherwise decent physical performance from a charming actor.

The others meet the bare minimum of decency. There is no primary motive to rob the Federal Reserve other than money, so there goes any threads that cut deep. Merriman does most of the aforementioned staring and grunting. He fires some cool guns and screams at a witness or two. He’s the sort of guy who would work better as a tough henchmen or a mini-boss than the leader of a gang. Besides the fact that 50 Cent is playing one of them, there is no reason to remember any of the other crew members’ names, even though the film provides them with captions.

“Den of Thieves” is well shot. There are sweeping vistas of LA at night and the yellow-tinted hills. There’s also a good production quality. Firefights spray bullet casings and glass every­where, and viewers can actually see what’s going on. There are a few in­stances where scenes of normal con­versation incorporate shaky cam, which I hate, but it’s not the most distracting issue. The most distracting would be “Den of Thieves’” tendency to rip off “Heat.” That makes it more unoriginal than bad, but to some that may make it worse. See it matinee on the second weekend or wait for rental on this one.