The Forest has a great premise. It’s inspired by the very real Aokiga­hara, colloquially known as the Suicide Forest, in Japan, where dozens of people kill themselves every year. As a result of all the deaths, some believe that the forest is haunted by the y?rei, restless spirits of the dead. While it sounds like it would make a terrifying horror movie, The Forest falls flat.

The movie follows American Sara Price as she travels to Japan to search for her twin sister, Jess, who was last seen in the notorious Suicide Forest. Sara is warned against going into the forest and especially against leaving the path, as there are spirits that prey on those with sadness in their hearts, but she is deter­mined to find her twin, who she believes is still alive. She joins up with an Austra­lian journalist, Aiden, and a Japanese guide, Michi, who agree to help her look for her sister. But strange things start happening, especially when Sara insists on staying after dark. The forest plays tricks on people, making it hard to know what is and isn’t real, and no warning is enough to prepare them for what is to come.

Unfortunately, that summary is more interesting than the actual movie. It’s not a long movie, less than a hundred min­utes, but it still manages to drag. Much of the movie is Sara walking around the forest, which, during the daylight, really isn’t a scary looking forest. The movie looks overly grey for much of the time, but that’s not the same as looking scary. At one point, there’s a breeze that stirs up leaves, which directs Sara to go in a different direction. It’s supposed to be ominous, but the only thing remotely spooky is the music. The forest does feel more ominous at night, but only as much as any other forest does, in the way that you don’t know if there’s any wildlife around. A lot of the attempted scares are jump scares that are broadcasted a mile away, so you know they’re coming and thus not scared—there’s flickering lights and a shrouded figure? Of course it’s going to jump at you, especially when the scene’s so drawn out!

This also brings to light a common problem with horror movie characters—they aren’t that smart, especially the main two characters, Sara and Aiden. Sara, at least, has some excuse, in that she’s driven by the worry that her twin is in danger, and thus ignores basic safety rules, like leaving the path in the forest, staying overnight, and with a stranger she just met. With Aiden, it’s less excus­able. He’s doing a story about the forest, and his interest in Sara is as a part of the story and that she’s attractive, so he doesn’t have a reason to be acting stupid. He lies and then is surprised that lying makes Sara not trust him, and then de­cides to give her a knife in order to calm her down.

Yes. A knife. In a forest he’s been warned that tries to trick people. He is stupid to offer the knife and Sara is stu­pid to accept. 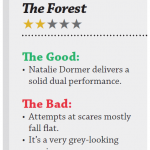 Overall, Aiden is just an idiotic char­acter, which is a shame, as he could have easily been a fascinating character. Tay­lor Kinney does a decent job playing Aiden, but there isn’t much to the char­acter. At one point, it looked like they were going to take the character a dif­ferent, darker, direction, and I think that would have made for a more interesting character and movie, but instead the movie sticks with the predictable, rather than taking a risk.

Michi, played by Yukiyoshi Ozawa, is also a missed opportunity. He patrols the forest every few days, looking for the dead while seeing if there are any living people he can dissuade from suicide. I wanted to know why he chose to do that, and what else he had seen in his time doing it, but he is an underused charac­ter. A movie following his story would probably be more interesting and worth seeing.

Natalie Dormer, playing both Sara and Jess, brings a strong performance, but she has little to work with. Her back­story was interesting, with her parents dying violently when she was young, though it felt like it could be the back­story to any horror movie lead character. She felt believable in her dual roles, and it made the movie more interesting. She realistically portrayed the emotions of someone who is losing touch with what is real and what isn’t, but it’s not enough to make the movie great.

In the end, The Forest is about as scary as walking around in a real forest, and probably less interesting. It takes a creepy concept and does very little with it. It’s not offensively bad, just deeply mediocre.