Black Mirror” was the first show purchased from another network by Netflix, and since then its popularity has only grown. Each episode is an anthology entirely separate from the rest of the series, examining the consequences of our rapidly advancing technology — and how that doesn’t always jive well with human error. However, with its penchant for the ironic last-minute “tweest,” the think-piece format of “Black Mirror” sometimes strains under the weight of its own nihilistic outcomes. As with any show that grows far past its humble beginnings, there is a danger the showrunners will misunderstand what made them a hit in the first place. That danger is no more apparent than with “Black Mirror’s” recently released season four.

Six new episodes grace the screen. “Arkangel” follows a mother utilizing an extremely invasive surveillance tool to keep an eye on her daughter. “U.S.S. Callister” is a space opera that delves deep into the mindset of the traditional male hero and the neckbeard spectre. “Crocodile” unfolds more traditionally, with an insurance agent stumbling onto a string of murders. “Hang the DJ” has some fun with the dating apps of the future. “Metalhead” takes place in post-apocalyptic Scotland, and a roving band of scavengers are on the run from a killer robot dog. Finally, “Black Museum” takes us through three different mini-stories connected to the titular roadside attraction.

The best episodes are undoubtedly the ones that have fun with their concepts. “U.S.S. Callister” is right up there in “San Junipero’s” league of great storytelling. We get standout performances from Jesse Plemons (“Breaking Bad”), Cristin Milioti (“Fargo”) and Jimmi Simpson (who has come a long way from “Kingdom of Badassdom”). The narrative unfolds with a serious tension and ends on a genuinely satisfying note.

“Hang the DJ” is also another story that seeks to fully explore its concept rather than it be a narrative crutch. Its two leads Joe Cole and Georgina Campbell are able to explore a wide range of emotional drama forced on them by a Siri from hell, making their failures legitimately sting and their victories cause for a celebratory grin.

Unfortunately, the rest leave something to be desired. “Black Mirror” is no stranger to “meh” episodes. “Arkangel” and “Crocodile” fit neatly into that category. The former utilized surveillance technology is effective in its anxiety-inducing familiarity to viewers. No one wants their mother (or anyone for that matter) watching their every move on a tablet like it’s “The Truman Show.” However, the consequences of this scenario are exactly what you’d expect. No effort is made to stretch beyond the schtick.

The latter episode mentioned also has an interesting piece of technology at its epicenter: memory recovery. It’s too bad “Black Mirror” already tackled it with season one’s “Entire History of You.” What’s left of “Crocodile” is a by-the-numbers crime serial following a murderess making choices so outlandishly dark and irrational it becomes almost cartoonish. 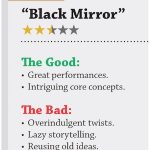 The episodes that do cross the threshold of mediocrity into just plain bad are the final two of the season: “Metalhead” and “Black Museum.” “Metalhead” is without a doubt the most boring episode of the entire series. A woman is chased around by robot dogs … and that’s it. There’s no context given to this empty world or its roaming assailants, no resolution other than an utterly expected final reveal and no real reason to care. There’s a glint of nuance when the woman looks at a silent set of instruments and realizes what was lost, but it only serves to highlight the rest of the episode’s mediocrity.

“Black Museum” is also a story that tries to recapture an older episode’s magic by presenting three different threads that tie together by the end. This makes it apparent that show creator Charlie Brooker is recycling his ideas, and he doesn’t even do it well. Each story is presented as a tour guide’s description of a corresponding item within the museum. “This is why this is here, this is why that is here.” It’s lazy, which is about all I can say for this season. If “Black Mirror” is to continue offering its own unique brand of television, it needs to stop cannibalizing itself and reevaluate its approach.