One of the most controversial documentaries I have ever seen, Mak­ing a Murderer, directed by Laura Ric­ciardi and Moira Demos, documents the events of Steven Avery and his questionable imprisonment on two different cases by the Manitowoc police.

The documentary does a good job detailing Steven Avery’s life. It men­tions his early childhood and upbring­ing, and what he had once done for a living, working at his family’s scrap yard in Manitowoc county, Wisconsin. Steven’s problems began when he as­saulted his cousin, in response to her spreading rumors about him, calling him a pervert. After the police get involved it is revealed Steven’s cousin is married to the sheriff. This incident is followed by future events discussed in nine other episodes filled with trag­edy, corruption, and negligence.

Each episodes’ run time is around fifty minutes. So prepare to dedicate some time to watch this series. The fifty minute run time I found, was never really an issue because the doc­umentary was constantly engaging and never boring. All the information provided never felt rushed and was very well fleshed out. The documen­tary continues at a steady pace and chronologically follows Steven Avery’s story, with his wrongful incarceration of 18 years, and the current situation he is in.

Though the information provided is well put together, it is also one-sided. When the documentary dis­cusses the story of Steven Avery, all interviews were mainly of those close to Steven who agree that he is inno­cent. When it came to discussing the cases and the evidence used, the doc­umentary makes it look like the police were corrupt and purposely tried to blame Steven for the crime. One ex­ample of incriminating evidence used to incarcerate Steven was witness tes­timonies. During this process the documentary showed that the police seemed to be leading the witness by showing old photos of Steven that match the description of the actual perpetrator. There is no question that the police mishandled the case, but I wished that the documentary did a better job of showing the police’s side of things. 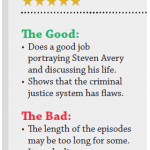 Things really begin to get contro­versial with the second half of the series. After Steven is released from prison as a result of new evidence that proved his innocence, he decides to file a lawsuit against the Manitowoc police. A couple days after the lawsuit begins, an incident occurs and Steven is again sentenced to prison.

Similar to the first half, the second half covers the events of this second case and the methods used by the po­lice. However, a prime focus for this latter part of the series is corruption instead of mishandling. The documen­tary gives the viewer information re­garding the case, including evidence planting by the police, and a few inter­rogation scenes where the police at­tempt to strong arm Steven and his relative into admitting guilt. In a video review done by Jeremy Jahns on YouTube, he describes this situation as a “conflict of interest” due to the fact that Steven is filing a lawsuit against the Manitowoc police depart­ment and the Manitowoc police hap­pen to find most of the evidence. The series then ends with a question on whether or not Steven did the crime and if the police had set it up to place the blame on Steven.

In the end, Making a Murderer is a must watch. It shows how the crim­inal justice system isn’t perfect and how police are capable of making mistakes. It makes you as a viewer reflect on the series and think about what you just watched.