Do Androids Dream of Electric Sheep?” is the title of Philip K. Dick’s 1968 novel, a meditational question explored in the story. It follows bounty hunter, Rick Deckard, on his quest to hunt down rogue androids living in secret among Earth’s decimated population. With every kill, he further reflects on what constitutes a being — living or synthetic — worthy of human empathy. This pioneer work was later adapted by director Ridley Scott for his 1982 sci-fi film “Blade Runner,” which altered the plot significantly to ponder what it took to be considered human.

The original film was a dud, but Scott released seven different cuts of the film since then. The latter ones even change the ending to suggest that Deckard, played by Harrison Ford, is actually a replicant — the movie’s version of an android. Now it’s a cult classic championed for its transcendental setting, groundbreaking special effects and a thematically rich plot that rewards repeated viewing. A sequel was thought to be unnecessary. Thirty-five years later, “Arrival” director Denis Villeneuve puts that assessment to the test.

“Blade Runner 2049” is set 30 years after the original, with older sentient replicants on the loose in Los Angeles. As more obedient models are produced for slave labor on extraterrestrial colonies, they are also incorporated as Blade Runners themselves to track down and “retire” their own kind.

The protagonist, K, played by Ryan Gosling, is one such replicant Blade Runner who stumbles upon a potentially world-shattering secret. Jared Leto’s replicant manufacturing magnate, Wallace, and Robin Wright’s Lieutenant Joshi have their stakes, and Ford returns as an older Rick Deckard.

Director Villeneuve requested that any coverage of this film should withhold any plot details. K’s replicant identity would technically fall under that purview given the Deckard debate, but trust me, it’s nothing that’s meant to be ambiguous. It’s a detail audiences should know anyways. Now at time of writing, despite universal praise, “Blade Runner 2049” is a box office bomb like its predecessor.

My guess is the bare bones synopsis other critics are forced to offer really contributes to a disinterested audience, to the point where multiple people have told me they thought this was a remake. How can they be interested if they don’t know what it’s about? It’s a shame because Villeneuve had the right idea. A person should go in cold, especially if the first film resonates with them like it did with me. Lord knows I tried viewing “Blade Runner 2049” with professional skepticism, but I can’t hold it back: it’s not only a worthy sequel, but quite possibly one of the best films ever made. It simply lacks an audience, so I’ll do my best to convince you it’s worth the ticket.

Considering the height of the pedestal that the first film has been set over time, gracefully expanding the established canon was always going to be the sequel’s biggest hurdle. The screenplay set forth by Michael Green and Hampton Fancher, who co-wrote the original, frames K’s journey as a quest for soul that draws parallels to Rutger Hauer’s Roy Batty before him. This allows Gosling to channel his distant “Drive” demeanor for moments of real extremity. I won’t fault him for not being as expressive in the role given he’s playing an android, and Ford more than picks up the slack with a truly stellar dramatic performance. The side cast is fine, though I can see Leto’s dialogue walk the fine line between provocative and up its own ass. His presence thankfully doesn’t linger enough to spoil an otherwise great story. 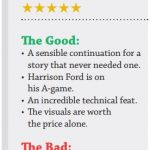 It manages to feel like the second half of one epic that’s still its own adventure. Hardcore Philip K. Dick fans may hesitate at such grand conflict since most of his characters are just regular Joes trying to make a living, but I think this movie shifts in a way that will satisfy them. Things are kept open-ended enough for possible sequels, but it doesn’t force the cinematic universe model that has taken 2010s cinema hostage.

Other critics have warned audiences that “Blade Runner 2049” is a slow-burn niche film that’s more academic than family fun, another reason I think viewers aren’t responding, but don’t be intimidated. The movie knows when to keep the audience up to speed. If one doesn’t end up liking the story anyway, go for the sheer spectacle. Every scene is a technical marvel to witness thanks to a gigantic budget, advances in filmmaking and an eerie soundtrack. The vistas of greater LA and the surrounding countryside are given a sleek CGI polish that exemplifies the original aesthetic, and remains practical when it can be.

If there was ever another movie in this franchise, I’d want to see those offworld colonies, but I’d be content if this was the last. It was better than I could’ve hoped, and everyone should see it in a theater as it’s meant to be seen.