I didn’t expect much with this mov­ie. Previous Star Wars films, notori­ously episodes 1-3, have been la­beled by fans and moviegoers as horrible with examples being bad dia­logue, annoying characters, and just not living up to the standards set by the original film. So I was curious how this movie was going to turn out. Was it going to be the movie Star Wars fans have been asking for? Or was it going to be a disappointment like the recent Star Wars films? I’m thinking it’s safe to say that this movie is excellent. This movie lives up to the hype left by the original Star Wars made back in the 70s.

Star Wars: The Force Awakens, di­rected by J.J. Abrams, is the seventh movie in the Star Wars universe. It takes place 30 years after the previous film, Return of the Jedi. Luke Skywalker has disappeared, and the remnants of the old Galactic Empire, now known as the First Order, fight the Resistance, led by Luke’s sister, Leia, and the Republic. Now Leia must track Luke down, so they may defeat the First Order and bring peace to the galaxy.

The first thing that caught my atten­tion with this movie is how it showed why the First Order is such a threat. One scene introduces one of the characters in the movie, Kylo Ren, a sith apprentice for the First Order. He proves he is a force not to be taken lightly (pun in­tended) as he stops a laser rifle from firing mid-blast. This scene also dem­onstrates that the First Order is merci­less. After the fighting in the previous scene is over, the soldiers begin to burn the village and kill all the survivors.

I liked how Abrams characterized the First Order. His approach showed how ruthless the First Order can be and even though they are remnants, they are still as powerful as the Galactic Em­pire. Besides Ren, there are other char­acters that play a huge role in the mov­ie. One such character, Finn, a former storm trooper, runs away from the First Order after growing tired of their ruth­less nature. The film though, could have done a better job with the pacing of his character. I would have liked it if the movie had shown the progression of why Finn made this decision to leave the First Order. This would have given the audience more time to grow ac­customed with Finn and his character growth.

Besides Finn, another character is introduced, Rey. Rey is also a main char­acter like Finn and Ren. She finds herself mixed up in this battle between the First Order and the resistance. Rey’s charac­ter isn’t as well fleshed out as Finn’s character due to the fact that we really don’t know much about her other than the fact that she is a former scavenger from a desert planet and the movie pur­posely leaves her past a mystery.

Also, a treat for Star Wars fans, old characters do make an appearance such as Leia and Han. Instead of being mere cameos, their appearance actually serves a serious purpose for the plot. The old characters are well written and have good chemistry with Rey and Finn. Having friendly conversations an 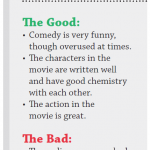 d throwing jokes around, you really feel the chemistry with them. The comedic relief in this movie is amusing. I genu­inely laughed at some of the scenes with these characters. However, some of these comedic moments felt out of place at times. In one scene Ren is seen de­stroying the interior of a room. As you see the sparks fly from the door you see two stormtroopers who are walking down the corridor stop and look at each other. They then begin to walk the other way to avoid Ren. The scene was humorous but it doesn’t make much sense. It serves no purpose to give the villains random moments of comedic relief. It makes them seem less of a threat and after seeing them be so ruthless and cold; having these moments is just awk­ward.

The only other real problem I had with the movie is the pacing. Certain areas in the movie feel rushed and don’t feel fleshed out and lacks explanation. Early in the movie, one of the characters is seen to have the ability to tap into the Force. However, they have no prior ex­perience with it. Then later, without any prior training, they can harness the power of the Force and use it like some­one who has trained for years. These events are then wrapped up by another scene that just happens, without any explanation, to progress the plot for the next movie. I wished the movie took more time to explain the progression of the Force powers other than, “Oh, they can tap into the Force, now they can control the Force.” I also wished they would explain how that last couple min­utes of the movie happened because it really does feel random.

Information is also lacking in the movie. To avoid spoilers, one of the main villains is a mystery. They appeared in this movie, are in charge of the First Order, and are also Ren’s master. The character appears very old but other than that, this character is a complete mystery. I wished this was explained in the movie including fleshing out these other scenes mentioned but then the movie would be about three hours long instead of two.

Besides these gripes I had with the movie, I still enjoyed watching it. The fighting was epic, the story was good and it was overall a solid movie. How­ever, I urge you to watch the old movies before you watch this one.

Make Yourself Better Than Before