With a flash of white, I found myself transported into a desolate corridor littered with 20th century technological scrap. Glowing blue diodes and wires snaking across the plaster hold this crumbling structure together. At the end of the corridor is a valve inviting me to twist. After several turns, my vision fragments like bad feed from a television. The way out is shut. The walls are alive. Water is rising from the floor, drowning me as I hear a woman calling for help. Everything goes red for a moment, and then reality collapses on itself. I wake to a computer’s toneless emergency extraction and pull the cord connecting me to a murder victim and their memories; and the investigation continues. This is the function of an Observer, a cop with forensic implants installed in their heads that allow them to access other people’s minds.

“Observer” is a cyberpunk horror game developed by the Polish studio, Bloober Team, set in the year 2084. By this time, almost everyone on Earth has some kind of implant or cybernetic augmentation. That’s fine, until a digital plague affecting those implants wipes out most of the planet’s population, and a third world war leaves modern civilization all but decimated. With no governments left, the dictatorial Chiron Corporation took power by establishing the Fifth Polish Republic, confining the poor to the slums of Krakow City, and using the Observers as their private police force — your typical dystopian future.

As an Observer, Daniel Lazarski — voiced tiredly by “Blade Runner” alumni Rutger Hauer — the player goes to a small apartment complex to look for his son after receiving a cryptic message from him. An ongoing murder spree sends the building into lockdown. The aim of the game is to find a way out, hopefully with your family in tow.

Such a small area to roam doesn’t usually court compelling game play. The bulk of what the player will be doing is searching for clues with the help of Daniel’s memory probing capabilities and vision implants that identify tech and biological tissue. Because the player is practically a cyborg, they will also be keeping an eye out for a medicine called Synchrozine to keep their systems from malfunctioning, lest they risk a game over.

During the investigation, a number of puzzles need to be solved — however, they’re not difficult in any sense. An early one requiring a four digit code and the conspicuously placed book “1984” sets the standard for most of them. Asking around for information is another way to progress, but speaking with the tenants of the building through their intercom is almost completely optional. Many of these conversations exist only to provide context and background information for life under this oppressive regime, and players will have to go out of their way to find them. As far as evil world-dominating corporations go, Chiron is almost at the back of one’s mind if one only toes the waters of the story. Taking the time to dive into it instead of sprinting to the next objective will provide the player with the most satisfaction. 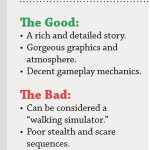 The horror elements come from plugging into a victim’s memories and reliving them up to the point where they are killed in order to unravel the mystery behind their deaths. These sequences are claustrophobic and psychedelic, and players have no choice but to keep marching through shifting levels, increasingly ineffective jump scares and stealth sections that actually detract from the game the longer it goes on. There’s no combat system, so pitting the player against enemies they can’t fight is irritating and shows a lack of focus.

That’s not to say those levels can’t get creative, but one wishes Bloober Team doubled down on the apartment setting. The design of the building takes heavy inspiration from the grimy neon-blasted aesthetic of “Blade Runner” and is beautifully visualized by the game’s near photorealistic engine. It also works better for the story being told. Characterized by fear and self-exploration, traditional gothic stories often incorporate a derelict structure full of mysteries and obstacles that represent the protagonist’s own internal questioning. Cyberpunk explores similar disputes, with an emphasis on humanity’s reaction and relationship to an almost overpowering advance of technology. These genres are a natural pairing.

The concoction of themes one can gleam by simply looking at the decayed state of the apartment complex, at all the holographic code and propaganda Daniel’s implants make him see; that is good enough. Why break the immersion by forcing players through repetitive nightmare roller coasters?

“Observer” may not convince those who dislike “walking simulators” or games like it, but the good news is that it has more positives than negatives. There’s a story and a bleakly gorgeous backdrop that intrigues in spite of itself for only $30. For any die-hard cyberpunk fan, it’s a must-buy.

Review: ‘Mass Effect: Andromeda,’ a voyage amongst the stars