Dragon Ball: Xenoverse is a fighting/role-playing game that was released February 15 2015 on Xbox One, Playstation 4, Xbox 360, and PC. When the game was first announced, I was initially intrigued by the concept. Other than Dragon Ball Online, there hasn’t been another Dragon Ball game that took inspirations from both the fighting and role-playing genres. So naturally as I sat down to play it I was curious on how different it was and how fun it would be to play. I’m proud to report that I indeed did have fun playing the game. Sadly, I noticed flaws with the game that kept it from being as great as it could have been.

As an anime fan, I enjoyed the abil­ity to create my own character in the Dragon Ball universe, and being able to interact with other main characters from the series. The immersion is made even better through the beauti­ful art style. It truly feels as though you’re watching the anime in action. Though the character creator is a nice addition, it is not as refined or doesn’t offer as many options as character creators in other games like Dragon Age or the Elder Scrolls. As such, dur­ing online play I found myself running into characters with similar physical features as my own character.

Another issue I had with the char­acter creator mechanic is how you buy accessories such as clothes and other items at in-game shops. You can’t see what your character looks like with the clothes on before you buy the item, which means you don’t know if items will look good on your character un­til you buy and equip them. 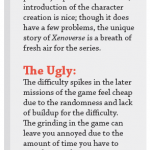 As mentioned previously, the plot has your character interact with some of the main characters from the series. Those who are unfamiliar with the story of Dragon Ball will be confused as to what is currently happening. For those with existing knowledge of the series, the fact that the plot skips over so much is a disappointment. It makes sense though, since it isn’t a standard Dragon Ball game. It creates its own unique story and adds new characters to the mixture, which is a fresh breath of air to the series. I will not spoil too much about the plot other than that something has gone wrong with the flow of time, and it is up to your char­acter to fix the problems that have occurred because of it.

The gameplay is the most fun that I’ve had with Xenoverse and also the most times I’ve been frustrated with the game. In Xenoverse all the options that deal with multiplayer, or single­player are held within the in-game hub world called Tokitoki City. Here the player can interact with other play­ers, buy items, start quests, and start the multiplayer. This is a hindrance due to the matter that you have to start the game, go to your character and enter the game with said character and walk to the booth that offers the option of the quest, item, or multi­player.

Besides main missions, there is also the option to complete side mis­sions or parallel quests. These quests grant the player experience points for their character, and have the possibil­ity to unlock new accessories and techniques for your character to use. One of the negatives of parallel quests is that the items are randomly gener­ated. If you don’t get an item you want the first time, you have to continue to replay the quest. This grinding eats up a lot of time and can be annoying af­ter a few unsuccessful tries.

The combat in Xenoverse is simple yet fun. There are two buttons that deal with punches, one heavy and one light. Other buttons include your en­ergy blast moves, super moves, ulti­mate moves, counters, using items, and talking to other players within the match. Your health, energy, and stam­ina meters can be upgraded with ex­perience points. Super and ultimate moves use up energy from your en­ergy meter. Guarding and countering uses up your stamina from your stamina meter so knowing when and when not to use a particular move adds some strategy to the combat.

The level of difficulty of the combat varies. Earlier missions aren’t difficult to complete however the difficulty un­naturally spikes in the later missions, making it seem unfair. The camera is also an issue. If your character is too close to something, the camera will be positioned in an awkward angle and cut off your line of sight.

After everything is said and done, Dragon Ball Xenoverse is a beautiful looking game with an interesting story and fun gameplay. If you can look past the issues of difficulty spikes and item grinding and are a fan of the series, then Dragon Ball: Xenoverse definitely deserves your attention.

Are Modern Video-Games Too Easy?