The original Dark Souls 2 was a notoriously dif­ficult action/role-playing-game title that was released in 2014 to critical acclaim. The game was part of the larger Souls series, which has won considerable critical and commercial success for its unrelenting difficulty and bleak nature. Dark Souls 2 and its predecessors combined polished third-person action with role-playing game elements and used severe penalties for dying to make the games tenser and more strategic. Scholar of the First Sin improves upon the original Dark Souls 2.

After starting up the game, the first thing players will notice is the updated graphics. Scholar of the First Sin is available for Playstation 4, Xbox One, and PC, and because of this, the game takes advantage of the newer hardware available and it not only looks better but feels better as well. For example, in the original you could use a torch to light up an area. However, I never really felt the need to do this due to the lighting and shadow effects of the game being mediocre. With this new edition, the torch makes a noticeable difference in dark areas, and it’s quite nice to see a mechanic that was barely used in the original become more relevant here.

However, the addition of new content and changes to old content is a breath of fresh air that makes it feel like you’re not just playing the same game. For example, locations within the Souls series are populated with certain enemies or non-playable characters. In Scholar of the First Sin, most of the 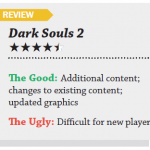 enemies have been switched around with other types of enemies, or additional enemies have been added to the area. For example, in one of the earlier areas of the game there used to be a huge rock knight that that guarded an entrance to a boss chamber. In Scholar of the First Sin, that knight that used to be there has been replaced with a fire breathing dragon that can kill any low level players almost instantly.

This causes the game to be much harder than the original. The addition of new enemies causes the game to feel almost new and unrecognizable. Those who played the original Souls games and are a fan of the difficulty will find this to be a welcome change, while those who disliked the difficulty will find this change unwanted and it may put off some players.

As far as length goes, it took me many hours to beat the base Dark Souls 2 game. With Scholar of the First Sin, the downloadable content that was available for Dark Souls 2 is immediately available, so an al­ready long game is made even longer with addi­tional content that will keep players busy for a long time.