The film’s hero, Baby, played by Ansel Elgort, is introduced behind the wheel as a getaway driver for bank robbers in order to repay his debt to the Atlanta mob boss, Doc, played by Kevin Spacey. Baby already doesn’t like working for criminals, but things get even more complicated when he meets a girl he could start over with — Lily James’ character, Debby. That’s the core conflict, any more would spoil the film. Watching is the only way to appreciate the painstaking effort the director, Edgar Wright, puts into his movies.

“Baby Driver” utilizes a leading man of few words comparatively better than other films that incorporate similar characters, like “Mad Max: Fury Road.” The story has enough meat to really dive into its hero, beyond the archetypical strong-silent type foundation. Baby barely talks, and spends much of his time listening to his headphones to drown out the ring of the tinnitus he received in an accident that claimed his mother. What could’ve been a potentially boring protagonist in clumsier hands swiftly validates his presence in the very first scene. All Baby needs is a car and “Bellbottoms” by the Jon Spencer Blues Explosion to turn it into one of the best physical performances of the summer.

It only gets better when the heist crew returns with the cash and Baby shows us what he can really do with a car. When he whips, he does so with a soundtrack on blast. He has iPods for different moods, and he mixes tapes out of random conversations he records, 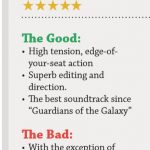 including those with his criminal associates. When the timing of the music is off, he has to reset it to drive properly. What Wright accomplishes here is not just an excuse to include his favorite playlists at random, but to interweave them with the “Baby Driver” world to give the songs purpose. It also elevates Baby’s quiet personality enough to make us root for him against the already insanely likable supporting cast of villains.

Spacey channels his deliciously intimidating charm from “House of Cards” to boss around an equally delirious crew. Only Jamie Foxx could play someone so hilariously threatening as his character, Bats. Jon Hamm and Eiza González provide a pulpy spin on Bonnie and Clyde with their personas, Buddy and Darling, respectively. The weak link in the solid cast may be Debby. She effectively takes the place of Baby’s mom and doesn’t get a chance to shine on her own, but that’s more of a nitpick.

The last major characters are the cars, and 99 percent of their scenes were practical. Working in tandem with the score, typical Wright smash cuts and long takes, and the actors’ choreography makes every single chase sequence individually better than other movies trying to do the same thing. Edgar Wright’s “Baby Driver” rises above this current era of passionless explosions and generic music included at a moment’s notice to remind you that these aesthetics can still be an art form with the right artist, and it’s nothing short of a masterpiece.

Opinion: Why living off-campus is the best housing for students