Centered around themes of exploration and paranoia, “Prey,” published by Bethesda Softworks, is an amazing game that manages to succeed in almost every aspect. While playing “Prey,” I never encountered any striking issues that hindered my enjoyment. It is a very well-polished game with much to offer.

The story for “Prey” is rather simple. It takes place in an alternative timeline where former President John F. Kennedy survives his assassination attempt in 1963. Kennedy begins to direct more funding into the space program, which results in more development towards the space race. This added activity attracts an alien species known as the Typhon, a black goo like alien that can change their shape to blend into the environment. Teaming up with Russia, the United States manages to defeat the Typhon and imprison them in the Kletka Space Station.

Fast forward to 2032 and the player assumes the role of Morgan Yu. Morgan is recruited by his brother Alex to go to the station — now called Talon-1. His goal is to assist with Typhon research. Things go horribly wrong and Morgan is trapped on the alien-filled station. He is forced to find a way to escape and contain the Typhon threat.

Throughout the game, the main theme is survival. While being trapped on the station the player has a large variety of gadgets at their disposal to hopefully keep the Typhon at bay. From a simple wrench to a powerful shotgun, diversity in weaponry is the player’s best friend. Not only are they diverse, they can also be creative and unexpected. For example, there is a weapon that spews out concrete which can either freeze enemies or create terrain: either as cover or as stairs to get to a higher vantage point.

There are also imploding grenades that drag in enemies and surrounding objects to be repurposed as supplies. These resources can be used to create useful items or upgrades such as ammunition or increasing health or weapon damage.

Combat encounters also let the player decide how they want to play. They can either be stealthy to avoid the Typhon while utilizing the environment, such as activating local defenses to attack surrounding enemies — or they can go in guns blazing and play it like a regular first-person shooter. This flexibility and variety of choices allows the players to be creative with their decision and makes no one playthrough the same.

The Typhon themselves also make combat encounters interesting, especially the chameleon like shapeshifters that can change form on a whim. This gives the player a sense of paranoia and makes the player constantly question their surroundings with doubts like, “Was that coffee cup there a second ago?” 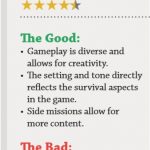 “Prey” is also an open world, meaning that the player can travel wherever they want in the space station throughout the game. Along the way, the player will be given many side missions, which can influence the overall story and give the player experience points — used to level up and upgrade certain abilities. However, these missions can also cause the player to backtrack to previous areas, which can be tedious and time consuming.

“Prey” is an amazing open-world survival game. The combat, and freedom of how to play is one of the game’s strong suits. Players who enjoyed titles like “Deus Ex” or “Dishonored” should feel right at home with “Prey.”

Opinion: The projected face of the faceless