Speak no evil, hear no evil. The Bye Bye Man is seen as a ghost or evil entity that only attacks if someone speaks or thinks of him. The answer is simple then. Just don’t think about the villain, and the villain will not appear. Sadly though, that is not what happens, and the audience is treated with an hour and 36 minute boring film — with narrative and acting that is amateur and a complete waste of time.

On paper, “The Bye Bye Man” is an interesting concept. A spiritual entity exists that is ultimately harmless, unless you think or talk about it. Such a conditional attacker, to my knowledge, hasn’t been done before in other horror films — which creates a tense situation where the main characters must fight their own inner psyche in an attempt to ward off any thoughts of the infamous phantom. Unfortunately, the film does a poor job in fully fleshing out the Bye Bye Man character.

This is mostly due to the horrible pacing of the film. Everything moves at a snail’s pace, and the dragged-out progression causes the film to become tiresome. It is not until the second half of the movie that the horror elements begin to make an appearance, but by that point, the damage has already been done and the interest in the movie has dwindled down to almost nothing. 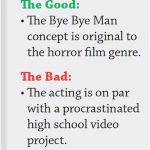 What makes the slow pacing even worse is the mediocre acting in the film. Whenever any of the characters appear on screen and speak out their lines, it destroys the immersion due to how laughable the performance was. In a scene where one of the college students is surprised, they say the line, “What’s that?” in such a manner that is completely out of character — despite the scene being tense, the actor managed to completely ruin the mood with an execution that was on par with a high school play.

The film’s narrative is not well thought out. One of the instances of this that stands out is how poorly The Bye Bye Man character’s history is written. For example, there is a dog demon that assists the Bye Bye Man. There’s no proper explanation on why the creature exists; it is just there to aid the Bye Bye Man for no apparent reason.

“The Bye Bye Man” is a sin to cinema. It has elements in it — such as the premise — that are intriguing. But in a film, there needs to be more than just that to be decent. With the poor acting, pacing and written narrative, “The Bye Bye Man” is a horrible film that is not worth the time or energy required to sit through it. If anyone does decide to go see it, bring a friend — then laugh about it later.