Last week in my “Stranger Things” season two review, I had mentioned how prevalent ’80s nostalgia is in the 2010s, and that the show is a love letter to the “kids-on-bikes” genre that resonated with youngsters in the age of MTV. But Marvel Studios sat down and asked themselves, ‘How can we tap into this beaten trend?’ and a lightbulb appeared over their heads: Instead of focusing on a middle aged person’s fondly remembered childhood, how about a homage to the stuff they watched on television as a kid? I’m talking “He-Man,” “Thundercats” and “Flash Gordon;” things my dad loved as much as I did watching “Spongebob,” “Ed, Edd, and Eddy” and “Dexter’s Laboratory.” This is the backbone of the 17th instalment in the Marvel Cinematic Universe, “Thor: Ragnarok.”

The titular God of Thunder, played by Chris Hemsworth, is traveling abroad through the cosmos, defeating evil wherever he finds it to protect the realm of Asgard. A new challenger — Hela, Cate Blanchett’s gleefully hammy spin on the goddess of death — proves too much for Thor, who is then exiled to the gladiator-trash world of Sakaar. There he must survive fighting for the entertainment of Jeff Goldblum — sorry, the “Grandmaster” played by Jeff Goldblum — and find a way back to Asgard to save his people.

The Thor franchise has often been considered the weakest among its brethren, and “Thor: The Dark World” is by far my least favorite Marvel outing. Even after the last few consecutive hits, there are still people getting tired of the superhero overload. Marvel creative teams knew that a change of vision was needed to win back bored viewers and those who had put Thor at the bottom of their favorites lists. Enter Taika Waititi, a New Zealander indie director known for two small-time comedies and a quirky sense of humor. What follows is better than most of the other Marvel movies combined.

The first thing I loved about this movie was Waititi’s approach to ignore the previous two entirely and build the film’s tone from scratch. Entire arcs left over are resolved with a throwaway line or a wisecrack, which may alienate fans who liked those movies, but it’s all in the spirit of fast pacing. “Thor: Ragnarok’s” goal is to have fun, and for better or worse, the party bus doesn’t stop for what came before. 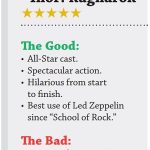 The film immediately differentiates itself with its combination of a synthwave soundtrack and saturated visuals reminiscent of comic legend Jack Kirby’s artwork. Everything in this universe is as vibrant as the characters inhabiting it, and the action set pieces are a rollercoaster of heavy metal and cartoon space opera. The only thing flying at you faster than one of Hela’s swords are the jokes. Most of the dialogue is improvised by the actors and I can’t think of one that was a hard miss.

Hemsworth’s picked up some comedic timing since his last Marvel gig. Tom Hiddleston is back as Thor’s mischievous adopted brother, Loki, who proves yet again that he’s not just the series’ best villain, but one of its best characters period. Tessa Thompson portrays newcomer heroine, Valkyrie, a strong female lead that compliments the feminist progress made by “Wonder Woman” earlier this year. Mark Ruffalo returns as the Incredible Hulk (did I mention this was also a buddy comedy?), who is considerably more intelligent since we last saw him in “Avengers: Age of Ultron.” Unfortunately, he spends most of the movie in his green form with little time for Bruce Banner. The cherry on top is of course Goldblum, whom the movie knows how to use incrementally to avoid over-seasoning.

Like the LSD the creative team certainly dropped before designing this movie, the enjoyment of the trip depends on the attitude of the person going in. Thor kicks ass to Led Zeppelin while Hulk fights a giant wolf on top of a rainbow bridge in this movie. I don’t know what about that doesn’t sound appealing, but I’d understand if there are folks turned off by a Marvel film trying to be more of a comedy than “Guardians of the Galaxy.” This can be a nitpick, but I can ignore it because “Thor: Ragnarok” is a playground fantasy come true. Now all I can hope for is Marvel hiring Waititi to direct another sequel, where Valkyrie punches Star-Lord in the nuts and Thor discovers Metallica’s “Ride the Lightning” album.

The food-heavy holiday is upon us, hungry for free turkey?