Imagine being alone in space with nothing meaningful to do and no one to interact with. Now extend that feeling to the remainder of your life. ‘Passengers’ is a sci-fi romance thriller that tries to implement elements of isolation with a romantic relationship between the two lead characters, Jim Preston, played by Chris Pratt, and Aurora, played by Jennifer Lawrence. The movie, ultimately, is a bland experience with a poorly executed narrative. 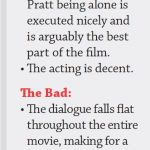 Preston and Aurora are passengers aboard a spaceship known as the Avalon on its way to colonize a new planet due to the overpopulation of Earth. The voyage was supposed to take 120 years, but 30 years in, Preston is accidentally awoken and cannot be refrozen back into cryo-sleep. Preston is the only one awake, and since the journey has another 90 years left, Preston knows he will not live to see it completed.

This was the strongest part of the film. Preston grapples with the knowledge that he will have to spend the remainder of his life alone, and this gives the film a sense of dread and helplessness. Preston copes with this despair by rummaging around the ship, drinking and eating the food and alcohol.

After some time passes, Preston comes across the still-sleeping Aurora and awakes her. The second part of the movie builds this relationship between Preston and Aurora, and this is by far the weakest part of the film. The romance-building between these two characters is nothing special and has been done countless times in other films, and “Passengers” fails to add or change anything to the romance genre.

“Passengers” is a film that tries to portray feelings of isolation and romance but fails to do anything creative with it. The romance in the film is nothing new, and in the end the movie is a forgettable yet somewhat enjoyable experience, if only for the first half of the film.