In 2006, JoJo was known as the cool girl, starring in movies like “RV” and “Aquamarine.” She was also known for her catchy songs like “Too Little Too Late.” and “Leave (Get Out).” At the peak of her fame, 15-year-old JoJo disappeared from the spotlight. Before she left the music scene, her 2006 sophomore album “The High Road.” gained mainstream success and hit number three on the Billboard Top 200 charts. Since JoJo was so successful during this time her disappearance was confusing to most fans.

JoJo later told The Huffington Post, “I was in a bad contract and the label I was with didn’t have distribution and I wasn’t able to release anything. I didn’t own my own voice. So I was stuck in a situation where I just felt like my hands were tied.” According to Billboard, after JoJo filed a lawsuit against her label in 2013 she was freed from her contract. 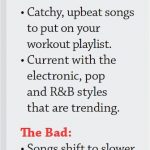 Her long awaited album “Mad Love.” was released Oct. 14 of this year and debuted at number six on the Billboard Top 200 chart. This album is filled with diverse sounds that feature fast electronic beats and slowed-down melodies. This R&Bpop album is filled with catchy songs that showcase her personal style.

The first half of the album features fun, fast-paced songs. The first six songs sound like they would be featured in a workout mix or a dance playlist. Meanwhile the second half of the album is slower; these songs begin to sound more alike as the album plays through.

The first song, “Music.,” is slower, featuring only JoJo and a piano. The lyrics give some background on her life. This song is a great opening number for her comeback. My favorite song on the album is “I Can Only. (feat. Alessia Cara).” This song is about being independent and doing whatever makes you happy regardless of what others think.

For those of you who loved listening to “The High Road.” on your iPod Nano while flipping through Tiger Beat magazine, know that JoJo still has her spark. Her sound is more mature, but her style is very current. With her mixture of beats and styles, JoJo sounds like a mix between Ariana Grande and Sia.

I would have liked this album to have a more fluid sound throughout. There is definitely a difference between the first and second half. JoJo is best when her vocal range and sassy lyrics are showcased. That being said, her catchy melodies and lyrics are definitely a step up from her last album.

Top 4 horror video games that need to be played