Remember Panic! at the Disco’s emo pop-punk album A Fever You Can’t Sweat Out? It was an album filled with songs about virgins, prostitutes, sinners, and mental illness. And their theatrical story-driven mu­sic videos reflected on the vaudeville and circus. If any of this information feels nostalgic, you were probably im­mersed in the emo middle school scene in the mid to late 2000s. Panic! was the most original and experimen­tal emo band at the time, compared to bands like Fall Out Boy and My Chemical Romance that whined about heartbreak and misery.

It’s been over 10 years since that album came out. Three unrecognized albums later, all that’s left is front man Brendon Urie, who is now a one-man show in the band’s fifth record Death of a Bachelor. This album brings old and new fans a mix of Queen (oper­atic screaming vocals) with Frank Sinatra’s charisma. The album main­tains the old dark, gothic sound.

Even though this album is techni­cally a solo record, Urie kept the name Panic! At The Disco. In Rolling Stone Magazine, Urie explains, “Panic! for me has been an outlet for nonchalant chaos. It gives me full ride to fulfill this dream that anything is possible because of this band.”

If you listen to the album once, you may think it is a glamorized emo pop-based album with a hint of Frank Sinatra. But if you listen a couple more times, you begin to notice his ability to cross multiple genres like swing, emo-goth-pop, and operatic rock in chaotic harmony. Most importantly, you will notice the hidden bits and pieces of the old Panic! Just like their first album, Death of a Bachelor is in­fectiously catchy, filled with witty and ironic lyrics. One of the strongest as­pects of the album is the vocals. Urie brings an operatic pop-punk sound into his well-known theatrical tones and falsettos.

The first song on the album, “Vic­torious,” was co-written with Rivers Cuomo, front man of famous alterna­tive rock band Weezer. Its pop-scream and ego-centric vibe creates the per­fect track for a raging party. With lyr­ics like “Double bubble disco queen / headed to the guillotine / skin as cool as Steve McQueen / let me be your killer king,” how can you resist?

“Emperor’s New Clothes” is my favorite song on the album. This song highlights Urie’s wide vocal range and an ability to create catchy yet dark hip-hop beats. Urie explains to Rolling Stone Magazine that this track is based off a Hans Christian Andersen’s classic fairy tale about two weavers that pro­vide an emperor with new clothes that are invisible to the public, thus making him no longer perceived as an em­peror but as a man with no clothes. Urie mimics the mentality of the em­peror when he sings “I’m taking back the crown / I’m all dressed up and naked / I see what’s mine and take it.”

“Crazy=Genius” proves that Panic! have not lost their love for vaudeville. This song mimics the chaotic energy of classic swing bands like Big Bad Voodoo Daddy. “Crazy=Genius” and past songs from A Fever You Can’t Sweat Out like “But It’s Better If You Do” shows Urie’s ability to create a scene of an forgone era and make it sound like he actually lived in it.

One of my biggest problems with the new album is that it doesn’t have that fuller sound of an actual band. Don’t get me wrong, Urie’s combina­tion of instruments and recorded beats is creative and well-put together, but lacks the organic aspect that music fans still value.

The first album explored holiness, darkness, and the vaudeville era while Urie’s new album ventures into im­maturity of partying in L.A. and self-discovery. His pop-filled song “Don’t Threaten Me With a Good Time” uses the twangy guitar riff of the classic B-52s song “Rock Lobster” for the chorus. Humorous lyrics in the song capture the image of a crazy party when he sings “I lost a bet to a guy in a chiffon skirt / But I make these high heels work.” On the other hand, a more nostalgic Panic! sang about a more dramatic topic in the song “Build God Then We’ll Talk”: about a lawyer who sleeps with a virgin for money. This song borrows from the classic musical The Sound of Music when they sing “There are no raindrops on roses and girls in white dresses / It’s sleeping with roaches and taking best guesses / At the shade of the sheets and before all the stains / And a few more of your least favorite things.” 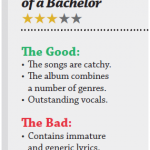 Speaking of old classics, Urie tells Upset Magazine, “I wrote a song called ‘Death of a Bachelor’ on piano. It’s very jazzy, very Sinatra-esque so I sung it that way but then put it with this beat that sounds like Beyonce’s ‘Drunk in Love.’ ” In “Death of a Bachelor,” Urie tells his older fans that he’s no longer the same 18-year-old emo vocalist. He sings, “Am I the best you’ve ever had? / Share one more drink with me / smile even though you’re sad.” His attempt to sing like Frank Sinatra makes this song unoriginal. A Fever You Can’t Sweat Out didn’t resemble one par­ticular artist, making the old album authentic.

To those of you who grew up on A Fever You Can’t Sweat Out, will con­tinue to treasure this album over any future recordings. It will forever feel nostalgic, darker, and always the best. But old fans can still appreciate the musical genius that is Brendon Urie. To the new generation of Panic! listen­ers, you may treasure Urie’s ability to praise past genres while creating something entirely his own.

I respect Panic! At The Disco’s change in music because it’s important for musicians to evolve. As long as Urie doesn’t forget the beauty that is A Fever You Can’t Sweat Out, I will remain a loyal fan.

What Will You Accomplish This Day in Black History?