Luke Cage is Marvel’s third coming to television and is an adaptation of the 1972 blaxploitation comic of the same name. Mike Colter oddly enough reprises his role as Luke Cage (previously seen in Jessica Jones), a barber shop store hand struggling to overcome his wife’s death and past imprisonment. Viewers quickly learn about his super-resilient, bulletproof skin, supernatural strength and random catchphrase, “Sweet Christmas!” Colter’s portrayal is so passive and brooding that I would be surprised if “speak softly and carry a big stick” wasn’t written on every other page of the script. His fight scenes are clumsy and lumbering in a good way — like Jessica Jones, but with fewer hostage situations and more of Cage shielding bystanders from bullets with his body.

However, with relatively few action scenes and several long, exposition-prone sit-downs where a pair of characters discuss current events and their respective values, Luke Cage feels more like a drama than superhero show. But of course, there’s still the bad guys.

Most apparent of the bads is Cornell “Cottonmouth” Stokes, owner of the Harlem Paradise club and the leader of a gun-peddling crime enterprise. Mahershala Ali plays the part beautifully, drawing the viewer in with a genuinely charming laugh before shocking with his violent temper. Alfre Woodard delivers a similarly unsettling and enrapturing performance as Mariah Dillard, a local city councilwoman running for reelection on a platform of a Harlem renaissance. She is defined by her media-savvy nature: espousing Black culture by way of reconstruction-era rhetoric on-camera while brokering shady deals with her cousin and partner in crime Cottonmouth in private.

As is becoming standard of Marvel’s Netflix offerings, most of the actors kill their performances while a lone few awkward portrayals stand out like sore thumbs. This time it’s Cottonmouth’s second-in-command Shades. The introductory scene for whom is so jarring as to postpone the realization that actor Theo Rossi is putting on that ridiculously-strained voice intentionally until several episodes later. Compounding this problem is Shades’ lack of any clear goals.

But that becomes a larger problem with Luke Cage — the bad guys don’t seem to be scheming much of anything. In Daredevil, they were selling drugs until they had enough to buy up a huge block of Hell’s Kitchen property and rebuild it. In Jessica Jones, the antagonist was an insane stalker and rapist. In Luke Cage, however, the villains don’t seem to be doing much other than fulfilling plot beats — inciting incident, character development, rising action, crisis, final confrontation, sing along if you know the words! In fact, it wouldn’t be a stretch to say the plot is that Marvel Television needed to fulfill its contract for a third Netflix series, so they set a handful of super villains loose upon Harlem.

The connected world-building for the rest of the Marvel movies and TV shows that comes with the territory is fairly harmless until you reach the final episode. Episode 13, “You Know My Steez,” apparently decides to stop this season half-way through and give viewers a very clumsy first episode for the inevitable season two. Rosario Dawson’s perpetually-hapless inner city nurse, Claire Temple, makes yet another appearance in Marvel TV since her 2015 debut in Daredevil. This time, at least, her role is better worked into the narrative than the magical show-hopping super-nurse plot device she was in Jessica Jones.

The shots Luke Cage is told through use creative angles and framing to cleverly relate characters to the sets and props. For instance, Cottonmouth often stands in his private room in such a way that the crown within his painting of The Notorious B.I.G. sits on his own head.

The Marvel writing is also as sharp as ever, delivering some refreshingly understated one-liners with habitual ease. Sharp references to Black history also pepper Luke Cage’s script, though the bad guys, not our titular hero, get the most fun lines.

In sharp contrast to this — at least in the pilot — Harlem is oversold. Caricatured like a 1950s film noir city — the setting becomes more interesting once they stop beating you over the head with barber shops and slang that the cast are very-apparently not familiar with. When the script lets the cast speak for themselves, Harlem’s murals, theatres and architecture (as well as the believable dialogue) really shine through. 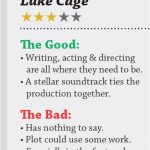 But perhaps the most genuine aspect of Luke Cage’s Harlem is the diverse music culture. Hip-hop, R&B and soul are all present and well-accounted for. Charles Bradley’s “Ain’t It a Sin?” Raphael Saadiq’s “Good Man” and Jidenna’s “Long Live the Chief” among others are prominently displayed via diegetic (in-universe) performances at the Harlem Paradise. “People Make the World Go Round” by The Stylistics accompanies a turbulent scene, its cool R&B bassline underscoring the dramatic tension well.

Finally, the politics of this one are unavoidable. However, for all of its expository intermissions, it fails to go any deeper than simply acknowledging racism and police brutality. Luke Cage prefers to use these themes as a setting rather than using them for any kind of moral. What’s more, it can’t help itself from sapping its narrative of all thematic relevance by contradicting itself with a bunch of twists requisite for its part-superhero genre (that is perhaps the most pretentious sentence I have ever written, but it really is a problem). Cage’s own milquetoast morality of personal responsibility is no less hollow than that of a thousand other superheroes, despite the show heavily invoking these issues within the dialogue.

It’s not as if these themes are at all elusive: the reason Luke Cage gets treated differently is literally his bulletproof, black skin. There are a million different ways they could have gone with this, especially this year of all years. It’s not like there’s any safety to be found in staying mum, either. When you have a nerd-culture show this prominent with a majority Black cast in 2016, conservatives will inevitably label it as politically-correct leftist propaganda, and progressives will invariably celebrate it as a milestone for political discourse within popular culture. But the truth is Luke Cage is neither: it simply has nothing to say.