Calling “The Punisher” a violent, gushing blood-fest would be accurate, but would not do it proper justice. Behind its brutal and shocking exte­rior, it is a deeply philosophical and psychological show. It tackles im­mensely difficult topics related to sol­diers and veterans.

The show performs admirably in regards to staying true to the spirit of the comics. Even though in this ver­sion the Punisher, or Frank Castle, served in Afghanistan rather than Vietnam like the original comic, his character remains practically un­changed. The characters are complex, engaging and help maintain the view­er experience even when the pace begins to slow.

The majority of the characters you get to follow in “The Punisher” are veterans. One of the most common themes is the struggle to reconcile, both in war time and everyday life after returning home. At a support group for veterans, which appears consistently across the season, they discuss and struggle with issues like acceptance upon their return. During one meeting, a character named Lewis stated, “All I know is that we risked our lives and we did terrible things, and it meant nothing when we came home.” Lewis felt increas­ingly isolated, never truly feeling properly situated at home.

Flashbacks from PTSD frequently take place as a pivotal narrative device. Castle regularly drifts in and out of flashbacks, especially amidst conflicts. The flashbacks switch back and forth between happy memories with his wife and kids, to reliving the moment in which he witnessed them being mur­dered right in front of him. It prevents him from interacting with others, even people he considers close friends are repeatedly turned off by his isolation. 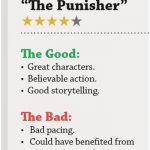 The actions the veterans had been ordered to carry out is always being dealt with. They were often forced to act in ways they knew to be absolute­ly unethical, but nonetheless, they felt they had no choice but to comply. “The Punisher” uses CIA black site — as well as military commands which are sure to lead to unnecessary losses of life — in order to breach the topic. Patriotism is conveyed in opposition to the Punisher’s aesthetics: it is any­thing but black and white. Following orders and doing your job are not always compatible, as the character Billy Russo points out.

Despite being a great show overall, it is not without its flaws. Like the majority of the other Netflix Marvel shows, it has serious issues with pac­ing. “The Punisher” tends to drag on, often trudging along at a pace incon­sistent with the gravity and sense of emergency of the plot. Its visceral intensity is sometimes overshadowed by its inconsistent, and grossly im­peded momentum. It is a wonderful addition to the Marvel Netflix line, and the second season is definitely something to keep an eye out for.

Lucas is a PPE major in University of Washington Tacoma, and he is graduating with a Bachelor's in philosophy. His primary interests are philosophy, politics, and law. He is currently working as a teacher at a secondary school while preparing to attend law school immediately following graduation.

Opinion: Education for the future