Outlander is already a phenomenon. Based on the bestselling series of novels about a World War II era nurse who falls back in time to 1700s Scotland, Outlander had a large fan base. The highly-anticipated first season of Outlander premiered to largely positive reviews. But could the second season, set in a different location with largely unfamiliar characters, capture that same spark?

For the most part, yes.

The biggest change is the location, from Scotland to France, and it’s an elaborate change. While the city of Paris may not be as beautiful as the country of Scotland, the costumes make up for it by being more stunning and over the top. The show takes full advantage of the time period, showing off the opulence of pre-Revolutionary France, and everything looks intensely detailed. Even the things that feel a little out of place, like the nipple rings shaped like swans, look meticulously crafted. Without a doubt, Outlander deserves to win awards for its costuming.

With a change in setting comes new characters, and there are plenty of them. From royalty to household staff, there are lots of fresh faces. Especially noteworthy is Claire Sermtonne as Louise, a wonderfully catty noblewoman, and Andrew Gower as Prince Charles, who seeks to have a Catholic king rule Scotland. 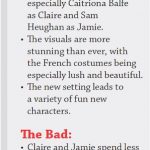 The focus is still with Claire, played by Caitriona Balfe, and Jamie, played by Sam Heughan, as they seek to change history by stopping an uprising that leads to the end of the Highland culture. They may be in France, but they haven’t left behind their demons. Jamie is suffering, probably post traumatic stress disorder, from the events that happened back home, and Claire struggles to help him, all while pregnant and trying to find a role in Parisian society. They are emotionally complex characters, and you really care about their problems and want to see them overcome them.

Because of everything the characters are going through, this season (so far), they have not been in many sensual scenes. Part of the appeal of Outlander is the sexiness, as it definitely earns its TV-MA rating, but since the main couple hasn’t been getting it on, they’ve instead added scenes in places like brothels instead, which adds eroticism without the intimacy. Hopefully that will change later in the series as Jamie is able to heal, but for now, it feels almost lackluster.

That is not to say it’s bad, not by any means. The plot is filled with intrigue and secret plots to restore or thwart monarchy, as well as all the little subplots involving the normal lives of characters. There’s always a new secret to uncover, or hard decision to make. It’s interesting to see a straightforward man like Jamie be a part of schemes and wonder if the actions he sees as dishonorable are worth it. There’s plenty of grey areas and dilemmas, and it makes for great television. Overall, Outlander season two is an era well worth revisiting.

Seeking Spectacular Scenes? Lake Cushman has What You’re Looking For

Analyzing the Godfather of Funk