Pierce the Veil (PTV) is a San Diego “post-emo hardcore” band. Some of you may be thinking, isn’t that what emo teenage girls listen to? Many rock music listeners over the age of 18 find post-hardcore bands like PTV very unmasculine and overdramatic. The rock listener’s prejudgment contributes to the notion that PTV is wimpy because of the lead singer’s high tenor vocals and the fact that most of their songs are about broken relationships and self-defeat. And let’s not forget that their fan base is predominantly teenage girls. I have been to their concerts, trust me. Despite the negative stereotype of listening to the high pitched screams of a man pouring his heart out, you may find Pierce the Veil emotionally complex and intriguing.

Before we talk about PTV, let me provide you a brief history about the post-hardcore scene that began in the 2000s. Post-hardcore is a subgenre that emerged from the hardcore punk music scene in the late 1980s. It incorporates aggressive and fast drum tempos, heavy bass levels, and tenor vocal ranges, in order to expose the internal battle of these dark and emotional minds.

PTV emerged into the post-hardcore scene in 2006, bringing their San Diego punk rock roots into action. The band consists of Vic Fuentes (lead singer/guitarist), Mike Fuentes (drummer), Tony Perry (lead guitarist), and Jaime Preciado (bassist) and has been compared to other experimental post-hardcore groups with tenor vocals such as Sleeping with Sirens, Chiodos, and Emarosa.

For 10 years, PTV has managed to create a complimentary chaotic sound with an overpowering melody, some attention-grabbing guitar lines and hardcore drums, and tenor vocals accompanied by dark screamo. Albums like A Flair for the Dramatic (2006) exposed the band’s angst and bitter emotions about adolescence. Selfish Machines (2010) brought fast-paced riffs and drum beats, dark and aggressive tones and harmonies, exceptional poetic lyrics, and crazy vocal ability. Collide with the Sky (2012) told an aggressive story of wanting to rise above the feeling of anguish and despair and was filled with angry and fast paced instrumentals.

It has been four years since PTV’s career skyrocketed with their third album Collide with the Sky (2012) and its worldwide hit “King for a Day” (featuring the lead singer of Sleeping with Sirens, Kellin Quinn). Now they are back, and Fuentes’ sporadic songwriting process brings some surprising twists and turns, while still maintaining the ability to tastefully experiment.

The album was produced by Dan Kornett, who has worked with Sleeping with Sirens, Breaking Benjamin, and My Chemical Romance. According to Rolling Stone Magazine, Kornett gave the band freedom to take risks and experiment. Fuentes says, “We’re ready to take risks; we like to dive into uncharted territory, because I think that makes for what our band is; it’s what creates the sound that we have, and it’s sort of like shooting in the dark, like, constantly.” Fuentes adds, “We completely broke each song down all the way to the bare bones, and just kept building it up, almost exhausting every possibility for each song, just to see what the song could become.”

Fuentes told Rolling Stone Magazine, “I wanted each song to be completely different, about a different time in our lives, a different story. If you were to ask me about any song I could tell you where I was when I wrote it, and how it affected me. So each one of them are little stories of my life of the last few years.” While Misadventures excels in storytelling with lyrics on every track, only half of the song’s instrumentals and vocals are captivating and stimulating.

Fuentes told Loudwire Magazine that the band’s lead single “Texas is Forever” is “a punk flavored song that goes back to the band’s roots” and “begs to be played live.” Fuentes also claims that this is the fastest song they have ever written. The strongest aspect of the song is the tempo variations that help create exciting start-and-stop moments and its catchy vocals.

Fuentes has been singing a brokenhearted story for the last three albums about a Southern girl from Texas. Fuentes ends the chapter on “Texas is Forever” when he sings “Here we are / Crashing once again / Into the center of your moonlit face / Our caved-in ribs / Your tears, they fall on my tongue / And our lips are letting go / As we laid on the side of the road.”

“The Divine Zero” is a cry for help. The song brings gut-wrenching and screeching vocals when Fuentes sings, “Maybe I could swim into your thoughts like your drugs do / Paralyze your body / Sick and tired of waking up to / Burning eyes and cigarettes / I’m falling through the couch like a suicide mission tonight / My God, here comes the downside.” The third verse’s aggressive guitar solo and drum rhythm complement each other well and reflect the feeling of madness.

Songs like “Dive In” and “Phantom Power & Ludicrous Speed” provides fans with something old and something new. These songs expose PTV’s classic furious drums, winding guitar, and menacing and mournful verses. Die hard PTV fans will be surprised by the incorporation of the piano and their pop punk influence.

Fuentes tells Rolling Stone Magazine that “Floral & Fading” is written for his girlfriend who was being attacked and threatened online. Fuentes comments, “I wrote this song about trying to tell her that none of that stuff on the Internet matters; all that matters are her and I. We could live on another planet and everything would be fine. So that’s what that song’s about.” 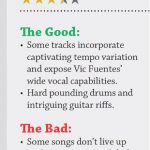 “Floral & Fading’s” lack of screaming and emphasis on love and happiness would make this track fall into the category of pop punk. Fuentes tells Rolling Stone Magazine that it is the slowest tempo the band has ever played. I’m not saying that pop punk is terrible, but the song simply doesn’t hook me.

“Circles” was written in reaction to the Paris attacks. The lyrics are emotionally hypnotizing when he sings, “You took my hand and then we both started running / Both started running / There’s no place to go.” But the generic melody does not reflect the darkness that the attacks brought to the world. Songs like “Bedless” and “Song for Isabelle” are both slow and melodic and lack the edginess that I crave for in PTV. But despite the softer tracks, I’m still going to listen to Misadventures, I will be just skipping a few songs.

With bands like Fall Out Boy, Black Veil Brides, and All Time Low, it’s easy to classify any subgenre that is remotely emo as cheesy and overdramatic. But trust me guys, put your biased stereotypes aside and give it a chance. Being overly dramatic, depressed, heartbroken, and selfish are not characteristics just for teenagers. I would even argue that the academic and social stresses of college would heighten these emotions on a deeper level. PTV captures deep, dark, and bitter emotions in a very effective way, and college students who love fast paced aggressive music could use PTV as a therapeutic release.

While Misadventures did not take me on a deep and complex journey on every single track, hits like “Texas is Forever” and “The Divine Zero” show that Pierce the Veil hasn’t lost their hyperactive post-hardcore sound.