Uncharted 4: A Thief’s End is both the conclusion for the series and the spiritual follow up to The Last of Us, developer Naughty Dog’s 2013 game, widely lauded for its novel narrative. Uncharted started in 2007 with Drake’s Fortune—a pulpy third-person shooter / climb ‘em up version of Indiana Jones—and continued on with subsequent releases in 2009 and 2011. It’s amazing to see how what was essentially a knockoff has grown to join the highest echelon of games. If anything, it’s a reminder that games can take good things from movies, like Metroid’s inspiration from Alien.

Mirroring its cinematic impetus, A Thief’s End is replete with stellar direction. Everything from the third-person camera to climbing buildings to cut scenes is shot with a masterful hand, enhancing the game’s already-gorgeous visuals. If there was ever a case for the transcendental value of art—that different mediums can learn from each other—this is it.

A Thief’s End is plainly Naughty Dog showing off. It’s a completely unnecessary sequel with all of the previous entries’ climbing, shooting, and “archaeology.” In the opening protagonist and player character Nathan Drake and love interest-turned-wife Elena Fisher are coming off of Uncharted 3’s happy movie ending, having settled down in middle class suburb du jour. Importantly, though, 4 has little of the previous trilogy’s campiness that made all of the pulp noir tropes and imperialistic overtones work, while retaining all of their flatly ridiculous premises.

It tries to be The Last of Us—it tries so hard to be The Last of Us—but what it reaches for just isn’t there. A Thief’s End’s cast simply can’t support much meaningful character drama. Don’t get me wrong; the storytelling is excellent— Naughty Dog’s facial animation and their voice actors’ performances have never been more impressive—but it feels hollow when they seemingly have so little to tell.

The inciting incident occurs when Drake’s long-lost brother, Sam, comes back (all the way from the prologue) in search of pirate treasure. Why does Drake suddenly have a brother after three previous games? Well, those keeping score will remember that Troy Baker, who voices Sam, also played Joel, one half of The Last of Us’ dual protagonist. “That’s right,” Naughty Dog ominously declared, “Troy Baker is ours now. Ours.” As obvious as that sounds, writer Neil Druckmann seemingly liked Baker’s range and hired him back to do the same job with a different accent.

It follows, then, that Sam’s presence is equally bizarre in the game itself—he serves as the buddy character for at least half of its run. In fact, most of A Thief’s End’s story is told through the dialogue between Drake and various companions while adventuring. Cutscenes only punctuate pivotal moments. Hearkening back to the pulpiness of previous entries, their banter often goes for comedy. Drake’s quips and one-liners can amuse, but they often feel a little too cute, self-aware, or worse: forced.

Drake and Elena themselves embody idealized gender roles which, while they’re fun to watch in the moment, ultimately hurt A Thief’s End’s efforts as a serious character drama. Drake is too roguish-but-well-meaning, Elena is too “the woman is always right,” and at that point they’re not characters; they’re just society’s expectations personified. A few decisions in particular will make heads spin. Character motivations feel inconsistent because they’re not retroactively written into the 8-year-old characters themselves, but rather drawn from social norms. Compounding this problem, cut scenes are spread too far from each other and too broadly in subject matter.

Uncharted is a cover-based third-person shooter like Indiana Jones is an archaeology-based movie: it’s there, but that’s not really the point. Ammo is plentiful and reloading quick, rendering a frenetic mix of running, jumping, and shooting the most effective way to play. Intentionally, it is also the most fun way. A Thief’s End is full of smart design decisions like this. Climbing, the other major component of playing, is as nuanced as it is stressful to those averse to heights. Players can fire at enemies one-handed while dangling from a cliff, lending a great flexibility to fights.

New to the series is the grappling hook, allowing Drake to rappel into giant chasms as well as swing past gunfire to other areas of the map. The levels are broad and multi-tiered, often spanning several stone outcroppings and buildings. They leverage the climbing system to add to—not detract—from the combat, tying them together better than in past games.

Stealth returns from The Last of Us, the simple-if-fun stealth takedowns commonplace in many modern games providing another way to approach encounters. Mercifully, if the player stays out of sight, climbing behind cover or traversing to a different area, enemies will lose Drake quickly. It cannot be understated how much this helps keep the pace up. The most ambitious 3D-rendered grass to date (I know, boring, but it’s actually really neat) helps players hide, parting and swaying as Drake moves through it.

Enemies are all gun-toting humans, which is usually a detriment. However, the level design is so varied and pocketed with unique landscapes that A Thief’s End makes up for it. Similar to what I experienced playing The Elder Scrolls, terrain variety actively increases the variety and novelty of the combat.

Perhaps the wisest aspect of the combat is that there isn’t too much of it. A Thief’s End greatly benefits from not being dragged through a cavalcade of ‘die, respawn, and die again’ gameplay loops. I truly wish more games would embrace this confident type of moderation. But worry not, action-craving players, the encounter replay menu allows one to load up and replay any fight in the game at whim.

There is also a standard shooter multiplayer mode, which can’t help but feel like a side attraction when stacked up against the masterful campaign. It’s fun, saved from complete unoriginality by the climbing mechanics (which could stand to be utilized more in the mode).

Playing as heroes and villains from the rest of the series is a nice touch. Their voice acting lends character to the mode, even if most of them are musclebound paramilitary men and/or ethnic stereotypes straight out of a pulp fiction novel.

As far as I can tell, Uncharted 4 has the best-looking realistic graphics to date. This isn’t simply about fidelity either; A Thief ’s End’s has a profound naturalism to it. Jungles are filled with ferns, snaking branches, and bright red earth. Meanwhile homes and streets are cluttered by cushions, fruit, and books. It even carries forth the overgrown, dilapidated building motif from The Last of Us, taking it further than any game before by filling environments with lush foliage and furniture. Everything is built big. Ornate palaces and caverns stretch tall and wide, giving Uncharted a larger-than-life feel. 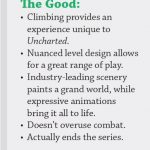 But animation is the real miracle-worker here. Staring at Drake’s back as he ambles up yet another stone-carved ruin would be considerably less enjoyable if his motions weren’t so fluid. Perhaps more than anything else, there’s a verisimilitude to Drake’s movement. The weight shifts through his body as he coils, leaps, and lands, his legs carrying on their momentum past the ledge he grabs onto. Nearly every motion that players could possibly run into has a unique animation to illustrate it as opposed to movement just halting unceremoniously. Drake will flex and adjust his body while climbing—even independent of the player’s control inputs— while still maintaining an immediacy to movement.

There’s a cinematic attention to detail in all areas of A Thief’s End. Motorcycles violently flip up into the air when they crash, their front wheel propelling them skyward. Several sequences see Drake hurtling toward a precipice only for him to stop at the edge, the camera following his movement out and over the edge, gazing down into the abyss below. Of these, the facial animation adds the most. Characters are rendered expressive through a process that captures the “voice” actors facial expressions, then refines them via hand animation.

It feels wrong to criticize this game. Not out of some perverse sense of loyalty or fandom, no, but for the sheer inconsequentiality of it. Like, if I were to say “The levels are too long,” what would come of that? Is it really a sin that a game this pretty would force players to look at it for 16 hours as opposed to 14 in order to finish it? The story? Sure; that’s fair game—Naughty Dog’s own prior work sets a high bar that A Thief’s End happily limbos beneath in both ambition and execution. But in terms of playing experience it’s paradoxical to hold Uncharted 4 to a higher standard because, for what it’s doing, this is the best there is.