It’s been eight years since the found footage monster movie, Cloverfield was released. Unlike its predecessor, 10 Cloverfield Lane is a suspenseful, claustrophobic journey with no towering monster in sight. Some fans of the old film may feel disappointed regarding the lack of a giant monster, but the overall enjoyment found in this movie quickly makes up for it.

10 Cloverfield Lane revolves around the story of a young woman named Michelle, played by Mary Elizabeth Winstead, as she tries to find a way to leave an underground bunker created by a mentally unstable man named Howard, played by John Goodman. The movie starts off slow and quiet, with backstory regarding Michelle’s straining relationship with her boyfriend. After a car accident, the movie quickly shifts tones. Michelle finds herself in a underground bunker and has no recollection of how she got there. She then meets Howard who tells her the air above the bunker is unbreathable due to a supposed fallout.

You spend the majority of the film then questioning whether or not Howard is telling the truth. Did he actually save Michelle’s life? Or did he just kidnap her for his amusement? This question becomes even more pressing as you spend more time with Howard and the other person in the bunker, Emmett, played by John Gallagher Jr. When evidence shows that there is something occurring on the outside of the bunker, the tension does not lighten. This is because the real threat of the movie lies in Howard, and this mostly has to do with Goodman’s excellent performance.

Goodman nails the role of Howard. At times, Howard can be a caring individual, and Michelle may 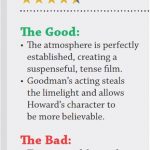 actually be able to live with him. However, for the majority of the movie, Howard is explosive. His personality is constantly unstable with fluctuating episodes ranging from minor to major. For example, when Michelle and Emmett are having dinner with him, Michelle puts her hand on Emmett’s hand and this causes Howard to burst into a moment of irrational rage and threaten to harm Emmett.

These moments leave the audience dreading what Howard will end up doing next. Will he end up harming one of the characters or worse? There really is no dull moment in this movie. The pacing is well executed and the film knows what it is and accomplishes it in great strides. My only complaint is when Michelle becomes resourceful in seemingly the direst of moments. Without spoiling much, there is a point in the movie where Michelle’s life is threatened and suddenly manages to create a weapon out of things in her surroundings. This is a minor issue I had but it still seemed implausible that someone could act that precise in that type of situation.

In the end, 10 Cloverfield Lane is a great, suspenseful experience that will keep you on the edge of your seat until the very last minute when the credits begin to roll. If you enjoy suspenseful movies that deal with the psychological aspects of the human mind, then this movie is a must-watch.

Declutter Your Life With KonMari

Gundam Iron-Blooded Orphans: A Return to Form for Gundam