Depending on how old you are, you might remember watching the classic angsty-teenagers-fighting-in-giant-robots anime Mobile Suit: Gundam Wing on Cartoon Network in the early 2000s. The long-running Gundam science fiction mecha franchise has put out numerous entries since then, but none of them have enjoyed similar mainstream success in the U.S. After having spent the better part of the last decade releasing series of wildly varying quality, Gundam has returned for its fourteenth main series with Iron-Blooded Orphans, a 25-episode series that just finished airing in the U.S. on anime streaming website Crunchyroll.

Iron-Blooded Orphans takes place 200 years after a bloody conflict named the Calamity War nearly ripped humanity apart. Naturally, we didn’t learn much from it. Racism and classism run rampant (not entirely unlike our own present!) and the inhabitants of colonies, such as Mars, face discrimination and exploitation.

The series focuses on a tightly knit group of child soldiers from Mars who overthrow their captors and start a private military company named Tekkadan. The group is led by a young, charismatic man named Orga Itsuka. The stoic Mikazuki Augus protects them all in an ancient but absurdly powerful mecha named the Calamity Gundam. The group saves the life of an idealistic aristocrat named Kudelia, and she hires them to take her to Earth, where she hopes to use her political influence to end the economic oppression of Mars.

As you might expect, things start going horribly wrong for our intrepid main characters. Hostile groups, chief among them a corrupt military force named Gjallarhorn, conspire to kidnap and/or kill Kudelia before she can get to Earth.

It’s not a terribly complex premise, but it works well. It’s firmly an action-adventure series, with more than enough high-flying, no-holds-barred mecha and spaceship battles to go around. However, it also succeeds in its quieter moments.

It has a strange habit of withholding backstory until several episodes after the fact, but the world-building is compelling. It could use more subtlety in how it handles issues such as racism and slavery—one group of child slaves are branded with red stripes across their clothing, brainwashed, and literally named “Human Debris”—but the series gains more than it loses by tackling these topics.

That said, no matter how good the world-building is, these series live and die by their characters. By that metric, the much older and perpetually despised Gundam Seed: Destiny died a slow agonizing death due to an overabundance of ham-fisted romance, inane melodrama, and characters breaking down sobbing over how sad life is. Thankfully, Iron-Blooded Orphans dodges many of those same mistakes.

Although none of its characters are very deep, they are almost all likable or sympathetic. The series excels at showing Tekkadan growing as a family unit. Over and over the series returns to the theme of brotherhood and the bonds that fighting and dying together build in its ragtag group of child soldiers (most of whom are boys or young men). Nowhere is this more evident than in its protagonists Orga and Mikazuki, whose lives were bound together by violence and desperation when they were only children.

The villains aren’t as compelling, but the series at least attempts to make them sympathetic. One flaw though is how the series doesn’t have enough villains to go around—certain enemies are recycled over and over again.

As you might guess, there is melodrama in the series, but it rarely becomes overwrought. You have your traditional Gundam moments where characters die tragically, leaving those behind to grieve their deaths and eventually work through their feelings in highly stylized robot-on-robot combat, but it has a lighter touch than many of the other Gundam series. Mercifully, romance is deemphasized, with only a few vague pairings popping up throughout the series. 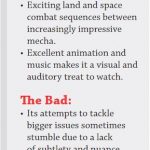 Some viewers might be bothered by how the series depicts some of its women in traditional gender roles (cook, teacher, nurse, etc.). However, these characters are still as compelling as the male characters, and they receive roughly the same level of characterization and depth, so it’s not an egregious flaw.

The combat is all very stylized, with the mechas exchanging massive punches and kicks, dueling with swords, axes and even a hammer-vice (yes, really), and gunning at each other with machine guns and rifles. The fights are aided by detailed, fluid animation and excellent fight choreography that make them a joy to watch. The excellent soundtrack and its pulse-pounding combat themes also amp up the excitement of the battles.

Additionally, Iron-Blooded Orphans does well at being accessible to new fans while still drawing upon its Gundam heritage. It takes place in its own universe, but there are pleasing similarities and callbacks to older Gundam series—impassioned idealism in the face of war and corruption, senseless and tragic deaths that hammer the rather belabored point that war only causes pain and suffering, and the loss of innocence. And like always, it revolves around a young man who seizes control of his destiny in the cockpit of a red-white-and-blue killing machine known as a Gundam.

Speaking of whom, our main character Mikazuki is a poor protagonist. He says and does little, instead preferring to follow orders from the infinitely more likable Orga. His character is completely static and he never grows beyond being Tekkadan’s emotionless trump card in combat. The series’ use of an ensemble cast mostly covers this flaw, but he still feels poorly conceived.

In a Room with a Stranger: 10 Cloverfield Lane Review

O.J. Simpson: The Power of Race, Money, and Celebrity