Gods of Egypt was never going to be a critic’s darling. Even before it was released, it came under fire for white­washing, as none of the three main actors are people of color, let alone Egyptian. The trailers didn’t make it look any better, with an incredibly ge­neric plot—bad guy wants to take over everything, good guy(s) have to stop him. So, what’s left to look forward to?

I can’t lie—after I saw the trailers, I had hope, and that was that this mov­ie was going to be bad. Not boringly or offensively bad, but hilariously bad, the sort of movie that you can’t help but laugh at. Fortunately, Gods of Egypt is the second type of bad.

So, what’s so bad about it? For one, the plot. It’s simple, inspired by Egyp­tian mythology, but could just as eas­ily been inspired by watching The Lion King—evil uncle kills the king and steals his throne, and the legitimate heir has to step up and set things right. The hero, Horus, has to learn valuable life lessons about himself and his place in the world, all with the help of a side­kick and a love interest. He even ap­peals to a mystical being in the sky for help on his journey. The more you think about it, the more similarities pop up. It’s weird.

But Gods of Egypt is definitely not a Disney movie. It’s an action movie with plenty of fight scenes. Some of them are great, like the start of the fight between Horus, played by Nikolaj Coster-Waldau, and the evil Set, played by Gerard Butler. With both men known for their action roles, Coster-Waldau in Game of Thrones and Butler in 300, their fight feels believable.

Until they turn into metallic CGI man-beast hybrids. Then they just look silly and the tension is gone. When there’s nothing “real” about the fight scenes, there’s nothing to do but make fun of them, and metal man-beast hy­brids are worth some giggles. More goofy than scary is the fact that the gods bleed gold, rather than normal red blood. When someone’s splattered in a liquid gold, it’s sparkly, not scary. 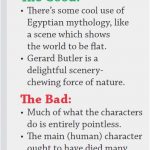 What’s scary are some of the impli­cations of the movie. When Set takes over, he makes it so anyone who wants to get into the afterlife has to pay in treasure. Those who can’t pay are seem­ingly erased from existence, all while screaming in pain. Set was in power for a year before Horus came back to fight him. Especially considering that Set killed freely, and that most of Egypt was poor, that’s a lot of people who died not only in one life, but in the afterlife as well.

It’s a good thing Horus’ mortal side­kick, Bek, played by Brenton Thwaites, managed to cheat death so many times. As a mortal thief helping Horus to de­feat Set, he gets into mortal peril time after time, with very few consequenc­es. If you took a shot every time Bek survived something impossible, like being pelted with tons of gold, falling off various objects, and being thrown over a dozen feet, you’d be dead your­self. Still, it’s a fun thing to count.

That’s not to say that nothing in this movie works. There are some genu­inely cool things included, like some of the ideas plucked from the Egyptian mythology. In one scene, we get to see that Earth is flat, and how the Sun goes around the Earth. There’s a lot of good visuals, like the swamp which Horus and friends go through to find the God of Wisdom. None of them are worth watching the 3D version— you’ll miss nothing watching the 2D version.

The actors are also good, with But­ler looking like he was having a great time playing the villain. Coster-Waldau, while not always likeable, is engaging, and Thwaites is charming in the boy-next-door sense. Geoffrey Rush plays Ra, the Sun God, and he is a far better actor than the movie deserves.

Overall, I wouldn’t recommend spending full price to see Gods of Egypt in theaters. If you can catch it in the dollar theaters or wait until it comes out on Netflix, I’d give it a watch. It’s a great pick for a bad movie night with friends. It’ll make you laugh, if not al­ways intentionally, so it’s worth your time.