Moana” is one of those movies some will look back upon and say “Yeah, this is going to be a classic Disney musical.” Set in the Polynesian islands within the Pacific Ocean, “Moana” tells a tale of a similarly named girl, Moana, played by Auli’i Cravalho. She is an adventurous young girl who sets out on a perilous adventure to find the demi-god Maui, played by Dwayne Johnson, so she can save her village from destruction.

A simple premise overall, but the reason it is so enjoyable to watch is because of the two leading characters, Moana and Maui. Moana is a young girl who aspires to do great things and wants to save her village — a selfless individual. Meanwhile, Maui is the complete opposite. He only does what he wants and is selfish in nature. At the beginning viewers may dislike Maui, but as the movie progresses he develops as a character and by the ending the audience will love Maui.

The interactions between these two characters are what make “Moana” so enjoyable. The movie is an hour and 53 minutes long. “Moana” is also a journey movie, meaning there is a lot of traveling and focus on the two main characters. If the two leading characters were not enjoyable, and written poorly, then the film would be a bore to watch. Thankfully, though, it is not. 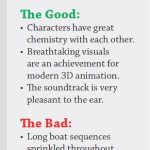 However, there are some moments where the plot slows down, such as when Moana and Maui are just on a boat. Nothing really occurs in these scenes and they serve just as a means of prolonging the plot.

Along with the characters, the visuals are amazing. There is a lot of water in the film due to the Polynesian locale, and it all looks colorful and vibrant. The water is animated so well it almost looks as though one could reach out and touch it. This also goes for the Maui’s character model. He has tattoos across his entire body, and they take a life of their own. When Maui transforms or he does something he shouldn’t, the tattoo art comes to life and physically expresses what’s happening, and what should happen.

“Moana’s” soundtrack is also a treat to the ears. The composers, Lin-Manuel Miranda, Mark Mancina and Opetaia Foa’i, took full advantage of the Pacific Islander themes and wrote the songs with Hawaiian atmosphere. There are some songs, however, that weren’t as good as the others. Those were mainly the ones in which the voice of Maui, Dwayne Johnson, sings.

In the end, “Moana” is a great Disney film. The entire film was fun from beginning to end and anyone who watches it will understand why.