There are few television shows with as much of a cult follow­ing as The X-Files. The orig­inal series, which followed a pair of FBI agents looking for the elusive truth about strange happenings, ran for nine seasons, with an additional two movies and a short-lived spinoff series. Now, The X-Files is back for a new season over a decade later, with the original actors, David Duchovny and Gillian Anderson reprising their roles. Is it enough to make The X-Files work again?

For the most part, it does work. Some things have changed for the better, the most obvious being the quality of the video itself and the vi­sual effects. From the very start of the first episode, you can tell that the visuals are so much clearer and better done than the original series, as the technology now is way more ad­vanced. CGI has come a long way since the nineties, and it shows, es­pecially in the look of the spaceships. Besides the opening credits, which appear to be the same ones used in the nineties, everything looks nicer.

Other things are simply changed, neither better nor worse. Mulder and Scully start out not being FBI agents, fitting in with the series’ previous continuity, but by the end of the first episode, they’re back in the FBI. It’s great to see them back together again, but at the same time, it’s frustrating that their relationship seems to have taken a step backwards. As a longtime fan of the series and of their relation­ship, I don’t want to have another “will they or won’t they get together” situation.

Another change is bringing back a character who previously died in the original series. As in—we saw him die in a ball of fire—dead. On the one hand, he was a polarizing character and I don’t mind seeing more of him. On the other hand, we saw him die, and it’s annoying when a show won’t let characters stay dead. There’s nothing that takes away the weight of a character death than knowing that the creators might bring him back. 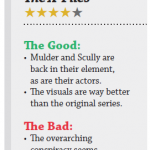 So, what else is brought back? Why, the convoluted conspiracy plots, of course! The longer the orig­inal series ran, the more knotted the plot became, eventually weighing the series down. For the new series, we get a new theory of what the elusive truth is, what’s really going on. Hon­estly, it seems needlessly complicated, and I’m hoping that it’ll become sim­pler soon. With all the technology, why would the shadowy villains need to remain in the shadows? Why not carry out their nefarious plans in the open? Who’s going to stop them?

Well, Mulder and Scully will, but that’s beside the point. They’re doing that anyway.

Mulder and Scully are at the heart of the series, as they should be. The original series went downhill after Mulder mostly left the show, and this season does not make that mistake. Mulder and Scully are a team again, and they play off each other amaz­ingly. David Duchovny as Mulder and Gillian Anderson as Scully have great chemistry together, and you can tell that these are characters who care deeply for each other as well as hav­ing a craving for finding the truth. The best part of the series is seeing them back together again, hearing their repartee, and simply watching them work. There’s not a dull moment when they’re on screen together. It’s also great to see Mitch Pileggi back again as their boss, as well as their ally in the FBI, Walter Skinner. It feels like old times in the best possible way.

So, should you give it a watch? Definitely! If you’re an old fan, you’ll love seeing familiar characters swept up in new cases. If you’ve never seen The X-Files, then this is a great intro­duction. The first episode gives a relatively short but solid recap of the series as a whole, and bits of history are tossed in throughout the episodes, so you won’t be lost—at least, no more so than anyone else watching. If you’re into sci-fi or the FBI, you should definitely check it out.

Watch The X-Files Monday nights at 8 pm on Fox or catch up on this season at: fox.com/the-x-files
The previous nine seasons are available to watch on Netflix.

Igor Levit Is Coming to Seattle