January is the season for self-im­provement, with resolutions fresh in everyone’s minds. No matter what the resolution, whether working out more or procrastinating less, habits are a vital part of resolutions. Gretchen Rubin’s Better Than Before is an in-depth look at habits and how different people can har­ness them in order to have a better life.

First things first—don’t ignore the introduction. It’s the strong introduction that lays out the main points of the book, and if you skip it, you might feel a little lost. Also, if you don’t like the author’s chatty style intertwined with personal anecdotes and scientific research, then you should put the book down, as the book follows the style and content of the introduction faithfully.

Throughout the book, Rubin argues that in order to set and keep habits, you need to know yourself that what makes one person persevere can be what makes another person quit. The first couple chapters are devoted to this self-knowl­edge, with Rubin describing first what she calls “the four tendencies,” which are the four main ways people deal with inner and outer expectations. People either meet or resist expectations, with some people classified as “Upholders,” trying to meet all expectations; “Rebels,” resisting all expectations; and most people meeting some expectations while resisting others, “Questioners” and “Obligers.”

After covering personality types, Rubin really gets into the heart of the book, which is dealing with creating (or breaking) habits. A lot of what she writes sounds familiar, especially if you’ve ever read advice on starting exercising—schedule time for whatever you’re trying to do, find something to hold yourself accountable, and track what you’re doing. It may not be new information, but it’s solid advice.

However, some of the information does feel fresh and unique, like her em­phasis on foundation habits, habits which strengthen self-control and thus build a 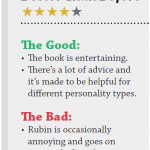 foundation for other habits. On one hand, it makes sense that when we’re rested, more active, eating healthy, and in a clean space, it’s easier to stick to good habits. On the other hand, these too are habits, and it seems strange to have ad­vice basically saying that in order to have good habits, have these set of good hab­its first.

More straightforward is the section on when to begin. (And don’t say tomor­row!) Rubin divides the types of begin­nings and explains the best ways to make them work for you. The most unique, and least helpful, part describes the “lightning bolt” beginning, where some­one decides to start or stop a habit out of the blue. As you can’t easily replicate a lightning bolt, it isn’t very helpful to the reader, but it’s fascinating to read, as Rubin spins stories of people who have had such experiences, like the woman who reached for a cigarette and instead decided to throw the whole pack away, never to smoke again.

That is not to say the rest of the book isn’t satisfying; far from it. “Desire, Ease, and Excuses,” perhaps the most helpful section of the book, covers topics like ways to make your habit stick better (or vanish quicker, if you’re trying to kick a bad habit) and excuses people try to make to get out of their habits. Rubin also explains why external rewards for having a good habit can actually sabotage your attempt to keep the habit going; a reward acts like a finish line, and once you cross it, it can feel like you’re “done” with your habit. There’s a lot of useful information to absorb.

Overall, Better Than Before makes for a great read, peppered with person­al accounts and scientific studies alike. The writing is engaging, and while not all the advice will be helpful to you, you’ll definitely find some tips and tricks worth trying.

Timbaland and His Music Empire

The Force Is Strong in This One: The Force Awakens Review