Even before the movie was released, The Ridiculous Six was already gathering negative press, with stories of American Native actors walking off the set because of stereotypes in the script. Add that to Adam Sandler’s poor track record—Pixels, That’s My Boy, Jack and Jill, to name a few —and it’s unlikely that anyone was expecting much out of the movie. But The Ridiculous Six manages to trip over even the lowest of expectations, being one of the dumbest, dullest movies of the year.

In case you’re blissfully unaware, The Ridiculous Six is supposed to be a comedy satirizing other Western movies, with Sandler starring as a man trying to save his long-lost father. Along the way, he finds out he has five brothers, together becoming the ridiculous six, and they join him in his quest to steal money in order to save their father’s life. It’s a simple plot, but plenty of other good comedies and westerns have simple plots, brought to life by fascinating characters.

This isn’t one of them.

The biggest problem in The Ridiculous Six is that it is boring. Incredibly, deeply, at its very core, boring. The plot brings few surprises and is embarrassingly predictable. Sandler gathers his brothers like he’s gathering members of a party in a videogame, all while stealing money to save his dad. Because they need more antagonists to make the movie longer, a random gang chases them the whole time.

In addition to being boring, so much of the plot is pointless. Sandler’s character has met his father once and he’s willing to steal to save the man—why? If he’s willing to go that far to save him, why not just fight the people who kidnapped him rather than gather a ransom? Sandler’s character has crazy mystical fighting powers, which of course are never really explained, so this would be plausible. Especially once he has his five brothers with him, it would make way more sense for him to stage a rescue attempt rather than pull off robberies to get the money to save his dad. Why do we need a scene of the brothers being forced to help invent baseball? Because Adam Sandler thinks it’s funny, that’s why.

But it’s not funny. Given that The Ridiculous Six is supposed to be a comedy, that’s a giant failure, much like the rest of the movie. The vast majority of the jokes fall flat, and as for satire, well, a few of the characters yell the word “satire” aloud a couple of times. That doesn’t make it satire, no matter how many times Vanilla Ice’s Mark Twain references it.

No, he isn’t the most annoying character. 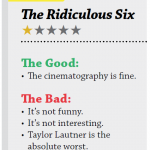 The most annoying character, surprisingly enough, isn’t Sandler’s Tommy “White Knife” Stockburn. Sandler plays it straight, and while the performance isn’t anywhere near good, it doesn’t make your eyes bleed. That honor goes to Taylor Lautner, who plays Lil’ Pete, a mentally handicapped man with weird teeth and an obnoxious voice, who is one of Tommy’s five brothers. Every aspect of his character is grating, from his voice to his mentions of having sex with cantaloupes, and we don’t even get to see his abs, despite his mention of a third nipple. Is that last complaint shallow? Yes, but I was looking for anything that would bring value to the movie. There are very few straws to grasp.

The biggest disappointment is that so many of the cast are actually talented actors. Luke Wilson, Terry Crews, Steve Zahn, Danny Trejo, Steve Buscemi—all of them have been great in other movies. There’s a lot of funny men who have nothing to work with. I say men deliberately. The women in this movie are an afterthought at best. Sandler’s love interest probably gets the most screen time of any woman in the movie, and she’s probably on screen ten minutes at best, mostly to be kidnapped. And this is a two hour movie. You’ll feel every minute of it.

In the end, The Ridiculous Six fails on nearly every possible level, but its biggest failure is it isn’t entertaining. It’s not even entertainingly bad; you can’t watch this and laugh about how much it sucks. It’s boring, and the only thing it’ll get from you is two hours of your life.

If for some unfathomable reason you want to watch The Ridiculous Six, it’s available exclusively on Netflix. But you know what else is on Netflix? Literally anything else. Watch something else.