2010 saw the release of Limbo, a striking black and white 2D puzzle-platformer conveyed entirely nonverbally (without text or speech), and Danish developer Playdead’s first game. Now in 2016, a full decade after the then two-man independent studio first began work on Limbo, their second game, Inside, is in players’ hands. It is nothing short of a resounding success.

Much like Limbo, Inside is a side-scrolling puzzle-platformer conveyed nonverbally with a grayscale palette (think Mario, but with more box-pushing puzzles). In another show of entropy, the player character is presumably the same generic, unnamed and undeveloped boy that too many independent games are slotting in as their placeholder protagonist (everyone wants that Limbo money). The very same boy whom I will refer to as “Shinji” for the remainder of this review, because that’s not much less stupid now is it?

However, much depth is added by the change to 2.5D graphics — the term for a 3D-rendered game that plays in two dimensions — as well as the addition of color. Without text or speech, Inside can only narrate through sounds and imagery. The sound design is very clever, with the clatter of rain dulling as Shinji walks indoors. The soundtrack is so understated as to almost not resemble music, leaving the focus squarely on the physical environment and ambient noises; a car in the distance, walking through a puddle and so on.

Formerly relying on the stark contrast of a black foreground silhouetted against an almost-glowing white background, Playdead now crafts a world in shades of gray with ever-so-slight touches of color. The driving aesthetic is still minimalism, though, as even the player character Shinji has no face to speak of.

That somewhat-important missing detail never hurts Inside, though. Most of the scenes show him as a small, red speck in the center of a large, gray expanse: Playdead is still working in silhouettes. Shinji’s body is the personified element we are left with and fluid contextual animations combined with responsive controls complete the picture. Sometimes he will climb through a fence carefully, sometimes he’ll jump over it haphazardly, slipping on the rain-slicked surface and still other times Shinji will trip over a root and get strangled by a bunch of faceless men who were chasing after him.

If something violent like that — or, more realistically, something much more violent than that — would bother you, then Inside might not be the best fit. Death is used to teach the player how to navigate the different elements in the world and is thus inevitable (though it is admittedly relieving that boxes falling on his head no longer cause Shinji to slump over in death, as they did in Limbo). This isn’t much of a gameplay flaw, as respawning is quick and checkpoints come often, but it could be gruesome all the same. In fact, Inside doesn’t have much regard for (anyone’s) bodily integrity at all, 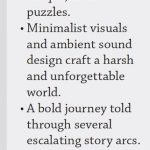 and often slips into horror. As someone who deems himself too brittle for horror, I appreciated the uneasy atmosphere and tension that never slipped into downright terror.

Inside’s puzzles also translate well to the realm of the living. Nearly every element encountered in this four hour journey is immediately relatable from real life or something encountered earlier in the game. The puzzles are greatly intuitive: climbing fences and trying not to drown while swimming, not esoteric number-crunching. The hidden puzzles — like everything in the game — are each unique, requiring creative solutions to ward away packs of feral dogs and various other dooms.

Inside is not a “story game”—I’d even argue that there is no overarching plot or clear themes — but it does scratch the same itch. Each area has its own self-contained plot and resolution, neither of which are constrained by typical narrative conventions. The entire game is conveyed nonverbally — and as a result, the storytelling is more emotional than it is exacting. There is an abundance of mystery, not all of which pays off. However, Inside does foreshadow very effectively, with distant barks turning into ravenous dogs chasing Shinji before you know it.

With games this singular, most words of criticism end up sounding false. At one point in the game there is a train in the background, so I was disappointed when I found that there was no train level despite Inside’s usual fondness of foreshadowing. Perhaps more significant than me crying over spilt trains, Inside isn’t great at providing closure. But these slights and could-have-beens feel utterly lacking when compared to the game Playdead actually created. I strongly encourage you to play Inside without learning anything further, as the experience is best left unexplained and unqualified, and does not disappoint.

The Most Dangerous Assumption