Nothing surprised me more than watching “The Lego Movie” back in 2014. It proved to be a very well done movie with a blend of humor that catered to both children and adults. The movie was silly and quick-paced, but had enough creativity and wit that it easily catered to all age groups.

“The Lego Batman Movie” serves as a spinoff that follows the adventures of the Lego Dark Knight, played by Will Arnett. Like its predecessor, “The Lego Batman Movie” is quick-paced with constant barrages of joke after joke — but unlike “The Lego Movie,” it has a simpler narrative. The movie only includes characters from the DC Universe and mainly focuses on Batman.

The way the movie portrays Batman is amazingly satirical. He is a narcissistic man-child, but despite this supposed negative, “The Lego Batman Movie” makes it work by also giving him a hilarious demeanor. The film parodies both the Batman universe and past films, including jabs towards previous Batman incarnations. 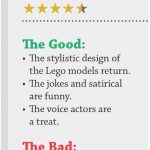 Besides poking fun at past films, the movie also jokes about the absurd number and types of villains in the Batman universe. For example, one of the main villains in the movie, the Joker — played by Zach Galifianakis — lists off several different foes. One of those listed is Condiment King, a villain that spews out condiments. A side character responds to this with, “Did you make that up?” due to the absurd nature of the villain.

“Lego Batman Movie” succeeds in so many regards because it knows what it is and has fun with it. What helps this is the superb acting. Both Arnett and Galifianakis do a splendid job in their roles and have a great chemistry with each other on screen. Their comedic approaches to the characters pair well with the Lego aesthetic. Whenever given the opportunity, Joker pokes fun at Batman, and this causes a back and forth between the two, eliciting a variety of emotions that can only be displayed in Lego form — such as erratic movements and expressive faces.

The movie is also full of Lego bricks, which allows for some whacky and crazy contraptions — such as Batman building a jet plane out of debris in the middle of free falling from a destroyed building.

The only problem with “Lego Batman Movie” is the quick and childish nature of the narrative. It is so silly and childish that it may put off some viewers. The constant satire may also upset some fans of the Batman universe, but if you can look past those parts of the film and just sit back and enjoy the ride, then it is worth the watch.

Review: ‘Black Mirror’ and the issues we didn’t know we had