With the beginning of the decade came many fresh hip hop faces. Talents like Kendrick Lamar, J. Cole and A$AP Rocky emerged to carry the torch passed down by artists who enjoyed their prime during the 2000s. One of the brightest stars of this new-class hip-hop was Mississippi rapper Big K.R.I.T. — a writer and producer that embodies everything good about the often neglected South. While the aforementioned rappers have enjoyed tremendous commercial success, Big K.R.I.T. has remained relatively low-key. His projects have all been critical successes, not so much with his sales. This is one of the biggest sins in hip-hop, because he can keep up — no, he outmatches — the majority of his peers. His latest album titled “4Eva is a Mighty Long Time” proves his status as one of the best in the game.

If you haven’t heard of Big K.R.I.T., it’s really not your fault. He was one of the most exciting new artists early in this decade, known for his lyrical prowess and ear for soulful beats. He gained popularity thanks to a series of critically acclaimed free albums (or mixtapes). This caused the giant hip hop label Def Jam to offer him a contract, ensuring rap-star status. Or at least that’s what many thought. Few years after signing up, most people agreed the label was actually hurting him. They didn’t provide support, they barely advertised him and they interfered with his creative process. This caused Big K.R.I.T. to part ways with them, closing a chapter of what could have been so much more. Now that he is independent — without the politics and drama of the label — K.R.I.T. can fully achieve the potential people saw in him.

The frustration about his experience with Def Jam and the desire to prove himself and have people listen to his music has fueled K.R.I.T.’s passion throughout the years. This hunger, in return, has helped him create a body of work that will be remembered as a defining point in his career. His latest album has all the makings of a classic.

“4Eva is a Mighty Long Time” is a double album, something very unusual to see nowadays. These albums are tricky, as they can suffer from having too much filler. This leaves the listener feeling bloated and asking themselves why it is so long. That’s not the case here, every one of the 22 songs feels like they belong on these discs. The double album adds to the project’s concept, which aims to show the duality in a rapper’s life.

The first disc is called the Big K.R.I.T. side, packed with jams that turn your speakers into absolute monsters. K.R.I.T. is known for his love of cars, bassy beats and southern influences like Outkast and UGK. These elements come together to deliver the type of music you listen to while driving on the freeway or when trying to max-up your reps at the gym. A personal favorite is the track “Big Bank,” featuring rapid-fire braggadocio verses from K.R.I.T. and guest T.I. over an epic, multi-layered instrumental. Another must-listen is “Subenstein,” named after — you guessed it — Frankenstein. In this record, K.R.I.T. wakes up your car’s subwoofer, making the ground shake with its powerful rumble. 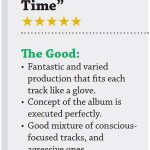 The second disc takes on a different side of K.R.I.T. Titled after his given name, “Justin Scott” sheds the stage names and deals with the man behind the mic. The flashy and extravagant rap persona takes a breather, focusing instead on conscious topics. This side provides an excellent contrast to the project, letting you see the vulnerabilities and weaknesses artists experience. The style of music transitions to something more mellow and soulful. K.R.I.T.’s lyrical skills shine through, touching on relatable subject matter — like what is worthwhile in life and the true value of material wealth — with beautifully constructed verses. Excellent instrumentals accompany the lyrics, each adding up to the overall feel of the song. An example of a fantastic concept track is “Drinking Sessions,” where a “drunken” K.R.I.T. lashes out at his old label, stating he is not one to be messed with. “Higher Calling” is a brilliant song about finding a significant other, and how to develop the relationship into something special. Another highlight of the disc is “Keep the Devil Off,” which has K.R.I.T. trying to bring up positivity in a world where bad things happen all the time.

“4Eva is a Mighty Long Time” is a phenomenal album that showcases an artist at the top of his game. In hip-hop, you usually have two camps: those who listen to whatever mumble rapper is trending, and those who value the craftsmanship and skill rap takes. If you fall in the second category, this is a project you can’t miss. The combination of excellent production, top-notch lyrics and relatable content makes this ambitious project a must-listen. If you haven’t heard of Big K.R.I.T. yet, fix that right now — go listen to this album (and all his other material) and then thank me. Don’t be sleeping on one of the best artists hip-hop has ever seen.

November 20th Letter To the Editor