“Why is there another ‘Pokémon’ game?” A rather existential question — don’t you think? Well, after that fateful day in November, there is. And much like our sitting president, Barack Obama II, “Pokémon Sun” and “Pokémon Moon” are from Hawaii and share a name with their relative.

“Pokémon,” as always, are capital-T Turn-based role-playing games. Players — cast in the role of Pokémon trainers — capture an assortment of fire-breathing animals and pit them against one another. In case you’ve missed the last 20 years of popular culture, each “Pokémon” release is comprised of two versions with minor differences. This diabolical Japanese social engineering exists to nudge players into the local and online multiplayer modes to trade Pokémon like so many pieces of self-broiling meat.

“Sun” and “Moon” are set in Alola, a chain of four tropical islands and a pun on the Hawaiian “aloha.” It’s appropriately groan-inducing, then, when characters start shouting the name of their homeland as greetings and farewell. “Pokémon” genuinely pursues this theme in its own way, framing Alola’s guardian Pokémon as godlike in a strange approximation of native Hawaiian spirituality. The Hawaiian theme is incorporated into the creatures themselves as well, with many Pokémon from the original “Red” and “Blue” seeing an Alolan subspecies and much-needed redesign. Fitting, since this entry sees some of the first substantive change from the series’ progenitors. These subspecies are used to great effect, like how the regional variant of Rattata is hunted by the new Pokémon Yungoos. This relationship is a play on Hawaii’s history, wherein commerce unintentionally introduced invasive rat species to the environment before the also non-native mongoose was intentionally introduced to prey upon them. On a more lighthearted note, the Alolan variant of Exeggutor — the egg and coconut tree Pokémon, for some reason — was changed into a dragon coconut tree. Its neck is so long that its head rarely even fits on-screen.

“Pokémon Sun” and “Pokémon Moon” also break from past entries by featuring an honest attempt at storytelling. The game starts with a foreboding sequence of a girl escaping from a sterile white-walled arboretum. The player character — a child — is established to have recently moved to Alola’s Melemele Island. They quickly meet the waiflike girl Lillie and narrowly save her odd Pokémon from some Spearow (birds). The rest of the game features an earnest, if short, anime-like story. Of particular note is the series’ ecology. While it has always been strong, past entries have shied away from honestly describing predation. Now, the game bluntly describes how Mareanie — a sea star — breaks off and eats the limbs of Corsola, a coral Pokémon.

Despite a realtime day and night cycle shifted by 12-hours for the later version, the differences between “Sun” and “Moon” aren’t night and day. Regardless of version, the world looks bright and upbeat. Bold colors and simple line art craft a strong aesthetic that is occasionally let down by a creature either ruinously over-designed or so simplistic one wonders how they made it into this millions-selling series.

With 802 Pokémon created over 20 years, they can’t all be winners.

Outside of just the titular creatures, “Sun” and “Moon’s” characters and islands also look vibrant — especially for a 3DS game. Some characters adopt horror movie levels of glee in their facial expressions, but thankfully no one tried to axe-murder the protagonist. The music — a pumping mix of electronic and classical sounds — is excellent from if listened to like an album. Within “Sun” and “Moon,” though, it commits the original sin of constantly repeating tracks. This is forgivable in most of the areas of the world, which feature area-specific themes with certain areas sporting remixes for either day or night. However, wild Pokémon and trainer battles — nearly every fight outside of boss battles — inexcusably play only one track each for the game’s entirety. This heedless aural assault damn near forces players to turn off the otherwise-charming sound and constitutes one of the title’s key flaws.

The trainer fights are largely unchallenging single combat like they’ve always been. The core conceit is an overcomplicated rock-paper-scissors game of exploiting your opponents’ elemental weaknesses. Mercifully, the user interface lists each attack’s effectiveness, no longer requiring players comb through literal charts to find the right attack. There are other battle modes, but only the S.O.S. battles are featured in the story and game world. These battles allow wild Pokémon to call another creature into the fray. They make for an interesting way to catch Pokémon, as some only show up when called upon. However, these intricacies are never explained to the player. “Sun” and “Moon” also feature online trading and battling. These modes are unchanged save for the addition of a four against four free-for-all battle mode.

The boss battles are the greatest standout moments. Tough encounters against particular wild Pokémon and trainers are set to infectious, energetic synth tunes. Players may find themselves falling into a groove while rapidly switching between Pokémon to find an effective attacker, willing their next strike to knock out a strong enemy creature. 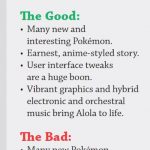 However, “Pokémon’s” core appeal is not its particular RPG combat — it’s the concept of training up a small army of pets and either making friends or sicking them upon one’s enemies. The core leveling mechanics still incentivize players to pick their favorites, but it feels as if “Pokémon’s” turn-based gameplay has become an end unto itself. Strategies wholly unexplained to casual players leave them at a hopeless disadvantage in online multiplayer. An array of arcane mechanics I won’t even attempt to explain here place mere competitiveness behind hours of grinding. Does anyone honestly look at “Pokémon” and think about effort values, egg moves or natures? Likely not.

Most get excited over new Pokémon. Unfortunately, many of “Sun” and “Moon’s” creatures are hidden in obscure corners of the game, while returning Pokémon take up their spotlight. This leaves fans to re-experience Pokémon from years ago. While it seems reasonable to introduce newcomers to the returning 721 out of 802 total creatures, it raises a question for series fans: Is “Pokémon” an inherently consumable experience? I would argue “yes,” because, in lieu of changing core mechanics and creating another compelling style of play, the easiest way to draw an audience’s eye is with brand new targets for empathy. This is in no short supply in “Sun” and “Moon,” with flashy super attacks and a mode which allows players to literally pet their Pokémon. But “new” ages quickly in pop culture, and players will move on before The Pokémon Company returns in a few years with another crop of empathetic mascots — almost like presidential elections.

“Pokémon” — like certain countries I could mention — is an amalgam of bad decisions and lack of vision. However, there is yet good in it — in vast amounts, even. It’s down to the elites who govern it and the people who support it to bring out its best qualities, despite the anomaly occupying it this cycle.

Urban Artworks: The nonprofit organization that brings opportunity to artists