The fight of the century, Batman v Superman: Dawn of Justice is finally here. The title summarizes exactly how the film plays out. The movie revolves around the buildup of tension between Batman and Superman, which results in an epic battle. However, the journey to this confrontation is plagued with sloppy, poorly put together scenes and questionable acting.

Since the film’s announcement, Batman v Superman: Dawn of Justice was criticized by DC fans for the choice of actors made by director Zack Snyder. Examples of this are the mild, socially awkward Jesse Eisenberg playing the corporate, serious bad guy, Alex Luthor a.k.a. Lex Luthor. Ben Affleck plays the caped crusader Bruce Wayne a.k.a. Batman, and Henry Cavill plays the Man of Steel, Superman a.k.a. Clark Kent. Sadly, only some of these actors did an amazing job portraying their roles. Quite easily the best and most surprising part of the movie was Ben Affleck’s performance as Batman. When Affleck was first announced to play the hero, fans were upset with the casting due to Affleck’s past performances being questionable, mainly because his role as the character Daredevil in the 2003 film Daredevil was seen by fans as horrible.

His acting throughout the movie is spectacular. Whenever Affleck is on the screen, he steals the spotlight. As Batman he is brutal, cold, and calculating. In the movie, Batman is not new to being a hero. He has over 20 years of experience and Affleck’s acting makes this believable. When Affleck is playing Bruce Wayne, whether the scene is serious or light hearted, Affleck perfectly captures the mood. Because of this, I was able to get immersed with the character.

I was skeptical about Jesse Eisenberg as Alex Luthor and rightfully so. Eisenberg was a questionable choice due to his demeanor not fitting Lex Luthor. Lex Luthor is serious, cunning, and manipulative. Eisenberg as an actor just doesn’t mesh well with this concept. Throughout the movie, whenever he was acting, he was always talking in a way where he was not threatening, but more so annoying. He rambles, making it difficult to understand him at times and when he delivers these lines he constantly twitches about. His character grew irritating immediately and I never saw him as the threat that he should have been. After his final scene, I’d completely had enough with the character and was glad that I no longer had to see him.

Henry Cavill’s performance as Superman was mundane. Throughout the majority of the movie Cavil rarely acted and most of the time in scenes just stood there in silence. In one important scene, Superman walks into a courtroom and just stands there and says nothing throughout the scene. When Cavill is in scenes with other actors such as Affleck, it becomes apparent who does a better performance. It is quite a shame that Snyder did not write a better script for Superman to get him more involved in the movie.

Since one of the movie’s main premises is how the government fears Superman as a god-like being, it would have been nice to see his own personal opinions regarding the matter. Superman never vocalizes his beliefs throughout the movie so the investment in the character is fairly limited.

The plot and the pacing of the film were also major issues. In a normal movie, scenes transition in a clear matter. In Batman v Superman, there are various characters that have their own subplot within the movie. Because of this, the scenes jump back and forth between each other and this leads to a lack of clarity and sense of randomness. None of the scenes in the first half of the movie are clearly connected to each other and it takes a couple of seconds to realize what is happening when a scene transitions. These moments are sloppy and, quite frankly, a jumbled mess. 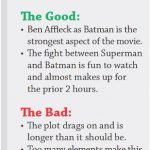 What adds to the problems of the plot is the pacing of the film. The movie is more than two hours long. I understand that the longer a film is, the more fleshed out the characters can be. The problem of length in Batman v Superman: Dawn of Justice is that it’s dragged out and not constructive. The movie has a number of scenes that do not hold any relevance to the plot. One of the unnecessary moments is the overabundance of dream sequences that involve Batman. Since this movie involves Batman, it is important to show his backstory. However, it constantly shows his past and after the first time, it began to get annoying.

This movie, similar to 2007’s Spiderman 3, is also guilty of having too many elements in one movie. Wonder Woman is introduced in the movie and her character remains mostly a mystery. She has no development and no meaningful interaction with the other characters. Her being in the movie felt like it was just shoehorned in so DC could release a Justice League movie faster in order to catch up with Marvel and their already released Avengers movies. This feeling becomes even more relevant when three different heroes have quick appearances in the film. These heroes are only seen once and they quickly disappear and have no effect on the overall plot of the film.

I wished Zack Snyder removed these elements from the movie because they served no purpose, and by rushing these heroes’ appearances, it gives them no development time. Because of this, the general audience feels no connection to these characters.

This movie could have been very well done if the Justice League elements were completely removed and if it just solely focused on Batman and Superman. But because of this, the overall movie is an unorganized mess, and the only redeemable aspects of the movie is the actual Batman and Superman fight and the final section of the movie. Besides that, this movie is a forgettable experience. However, if you are a fan of the DC comics or just looking for a momentary popcorn fest, then this movie deserves a watch.

We Feel the Bern: WA Helps Lead the Sanders Revolution