I’m not familiar with the original Mad Max movies. So when I first heard of Mad Max, I thought it would be about a post-apocalyptic wasteland where we watch Max try to live and survive in a harsh world. For the most part I was correct. Mad Max is set in a post-apocalyptic wasteland, except it isn’t as serious or sane as I thought it would be. The film turned out to be an insane heavy metal adventure full of explosions and cars across the wasteland I say heavy metal due to a lot of the imagery within this mov­ie. For example, one of the cars in the movie had a person on top of it who played a guitar that spewed flames from its tip. 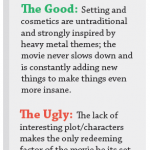 Though the movie was nothing like what I expected, it still was enjoy­able. The style of the movie was very different and very outrageous com­pared to other Hollywood movies. To see all the crazy car designs and to see how the characters acted defines the word abnormal. For example, throughout the movie, characters would spray what seems to be silver spray paint around their mouths and would scream phrases like “I’m shin­ny” and “For Valhalla.” Some might not like this type of movie due to the amount of crazy and incoherent mo­ments like the moments mentioned previously, but I still enjoyed it due to how crazy and different it was.

Though I said that the movie is incoherent and is random most of the time, there is some plot within the movie. The entire movie revolves around from getting from point A to point B while evading a horde of crazy marauders that are “shinny.” The plot is nothing really special and the characters are really not that memorable and some are just forget­table. Though you spend the entire movie traveling with them, there aren’t really any cases of character development with the characters ex­cept in a few instances. Really, the entire movie is held together and is interesting due to the cosmetics and the setting.

Overall, Mad Max is a movie that constantly has its foot on the gas pedal and never lets it off. The mov­ie never tries to be coherent and is always crazy. Because of this, the movie knows what it is and is more enjoyable because of it. If you can look past the lack of plot and interest­ing characters and are a fan of out of control explosions, action, crazy cars, and destruction, this is definitely the movie to watch.

Ten Movies to Rock Your Summer

10 Ways to Save Money At UWT